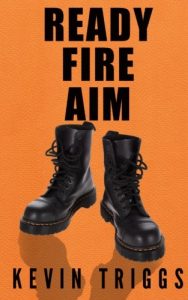 Triggs first novel chronicles the teenage experiences of a young Milwaukee boy George Dachs as he navigates his way through the age-old search for self-identity, love and the need to find a peer group.

Dachs forays into drug and alcohol experimentation, the inevitable first love scenario, antipathy towards school and parental conflicts are areas most, if not all, teenagers can identify with. His involvement in, and attempt to unite the Anti-racist Milwaukee skinhead scene, black gang bangers and pro Zionist Russian Jews however may not; and it’s these associations that give the book it’s grittier elements, invoking a comparison with Don De Grazia’s ‘American Skin’ but with the more straight forward style of Richard Allen’s ‘Skinhead’ series.

The book often reads as semi-autobiographical with some parts analysed in quite a lot of detail, implying first-hand experience of the events. Triggs’ references to real Punk, Ska and Oi bands such as Murphy’s Law, 4 Skins and the Mighty Mighty Bosstones also helps to paint a realistic picture of involvement in the punk/skinhead scene.

At almost 600 pages it’s quite a tour de force and there’s no doubt that Ready Fire Aim would have befitted from some aggressive editing; that said it’s an enjoyable bit of light reading particularly for those of us who have walked a similar path to young George Dachs.  Conan Troutman