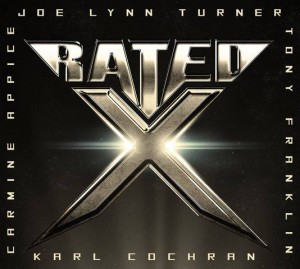 RATED X – Rated X (Frontiers)
Being honest here, well, I was never a massive JLT fan. He was okay for Deep Purple, he was my least favourite Rainbow singer etc, and so I was not so quick to rock this album. But here the enigmatic and ostentatious (apparently) front-man has returned with a mature sound, a very developed sound, and one that is not rushed – a prime wedge of American rock, and backed by a trio of established musicians, as the artwork cunningly displays. Simply put RATED X is the finest offering ever for the vocalist, some of the best tunes I have heard him sing, and probably his strongest and most honed performance musically. Sure there is going to be the obvious comparisons as ‘On The Way To Paradise’ demonstrates brimming with above accolades but never overbearing. Any way what could you expect with the personnel involved here? ‘This Is Who I Am’ shows a heavy and deeper sound with a really identifiable origin, something to focus on maybe; also we get the obligatory power-ballad-rocker ‘Fire And Ice’, but of course, otherwise the album would be incomplete! The earlier part of ‘Rated X’ sees most of the tracks coming in at around the four-minute mark, it’s after the 7.15 minute elongated epic rocker ‘ Lhasa’ (where JLT really pushes his vocals, and the slick guitar work embeds itself amongst a truly solid rhythm) that things start to flow for a little longer. Across the twelve tunes one can undeniably feel less pop, and more rock to the commercial melodies this band create. If you loved any of the above bands, Blue Murder, or Vanilla Fudge then RATED X will surely rock your boat. Mark Freebase