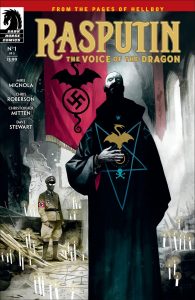 Are you a fan of Hellboy? It doesn’t really matter if you are or not as this new 5 issue series from Mike Mignola and Chris Roberson, although set in the Hellboy universe, doesn’t require any knowledge of Hellboy at all.  If you are a fan of Big Red, then you’ll know that he was summoned to Earth at the end of World War 2 by Rasputin and the Nazis.  Instead of becoming Hitler’s war-winning weapon, baby Hellboy was adopted by Professor Bruttenholm, an English occult investigator.  Thanks to the love shown by the professor, Hellbaby is able to resist his demonic nature and grows into the hero we all know and love today.

This series concentrates on the stories of Rasputin and Bruttenholm before Hellboy was summoned to Earth.  This first issue deals with Rasputin’s recruitment by the Nazis and how Bruttenholm, working as a code breaker for British Intelligence, stumbles across some references to the German Operation Geist (German for Ghost).  Investigating the clues leads Bruttenholm to the sleepy village of Harpenden (these villages are always sleepy for some reason).  Once there he uncovers some mysterious happenings at the local graveyard and evidence suggesting involvement by the ancient cult, the Heliopic Brotherhood of Ra.  Bruttenholm goes for a quiet pint to mull it all over and gets attacked by a German speaking cadaver.  So ends the first issue.

It’s always tricky to review a first issue.  They are often just a precursor to the story to come, drip feeding just enough information to reel you in to buy issue two.  That’s the job of the first issue and it’s a job this comic does bloody well.  The script flows well and gives enough information for the reader to work out what’s going on without giving the whole game away.  You know that the Nazis are resurrecting cult members, but you don’t know why.  Professor Bruttenholm is a likable hero, with enough of the English stiff upper lip to take the undead in his stride.  And you can’t really go wrong with Nazi zombies.

Christopher Mitten does a credible job as artist, making Rasputin’s eyes genuinely haunting.  So great story, great art and no prior knowledge of Hellboy required.  What are you waiting for? Go get it. Paul Ferriday