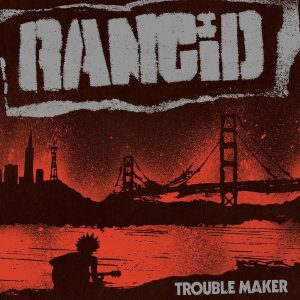 Unless you’ve been hiding in a cabin in the woods, writing your manifesto detailing the collapse and downfall of Western civilisation for the last twenty five years or are new to the whole punk rocks thing, I’d be willing to put good money on the fact that you (a) already know who Rancid are and what they sound like, (b) own at least one of their records and that (c) the Rancid record you definitely own is And Out Come the Wolves.  And I’m not a gambling man. Never have been, never will be. So you already know what to expect from Trouble Maker, and what you expect, you get and then some as Lint, Matt, Lars and Branden (the new drummer guy – yeah, I know he’s been in the band for a while, but I’m old and saw Rancid when they first hit these shores back in ’93 and there were barely forty people watching ‘em in TJ’s, so he’ll always be the new drummer to me) deliver seventeen tracks of catchy, high energy, rock’n’roll driven punk rock.  Trouble Maker is Rancid by numbers, doing what they do best, allowing their incredibly infectious hybrid of The Clash, Stiff Little Fingers and the Business with a side order of dance hall ska and fifties rock’n’roll thrown in for good measure to take centre stage again and show all of the young whipper snappers and pretenders to the throne how it should, and can, be done.  As my old friend George Tabb would say, punk rock…  Tim Cundle