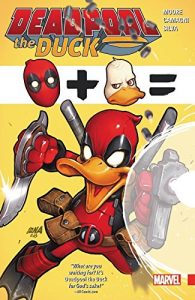 Howard and Wade sitting in a… Wait, no, that’s not how the whole Deadpool the Duck thing happens. Well, you know, yes, I suppose in some twisted, dark corner of the galaxy where Victor Von Doom likes to holiday, it might happen like that, but not here on Earth buddy, no sir, no how, no way. Our biology doesn’t roll like that unless it’s being used for experimentation in a secret Hydra laboratory underneath an abandoned volcano far away from prying eyes.  What does make Deadpool the Duck however is Wade being sent to hunt for a space “rabies” infected smash box office level extra-terrestrial, Howard getting in the way and a rather unfortunate bite in the teleporter. And that isn’t a euphemism; I really do mean that the whole crazy affair is started when teeth and technology meet. Cue a slightly bonkers, laugh out loud story involving spirit animals, Howard and Wade sharing a body, a prolonged knock-down, drag out fight with Roxxon and their rather robust representative that bounces our heroes from Earth to orbit and back again, a “super”-villain determined to ring everyone’s bells, a whole load of unresolved parental and personality issues and the kind of ending that anyone who has ever felt the full weight of the Universe pressing down on them will be able to immediately relate to.

As team-ups go, Moore and Camagni are right up there with Cap and Bucky, or at least they would be if Steve and James day jobs were writing and illustrating comics instead of beating the holy hell out of bad guys and saving the world.  Camagni’s dazzling and delightful artwork is matched only by Moore’s gift for madcap, and more than slightly bonkers, story-telling and his ability to craft comedic dialogue that’s actually funny and his innate understanding, and ability to take the reins of (and write for) characters who are more than a little broken and slightly out of step with the rest of the world.  Deadpool the Duck won’t change society, reshape the wheel or alter our fundamental understanding of the Universe, but it isn’t meant to. What it does do is exactly what it’s supposed to. It’ll make you laugh, it’ll make you forget all of your troubles and all of that nonsensical real world stuff for a couple of hours and it’ll leave you with a mile wide grin plastered all over your face.  And all things considered that’s, you know, pretty darn great…. Tim Cundle