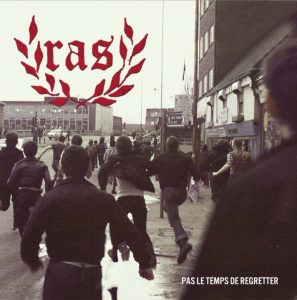 Originally active between 1982 and ‘84, this legendary French oi! band has been back on the live circuit for a couple of years now, but this is the first new recordings of theirs that have seen the light since their reformation. These are not new songs, but re-recorded versions of songs that were written but never released when they were active. As you might expect, the songs capture the era perfectly, and you can hear how visits to London in the early 80s have had an influence as they incorporate UK touches on their typical French oi! sound. Somewhere between The Last Resort, Komintern Sect and Major Accident, the five tunes on here are quite varied, with slower more melodic tunes opening procedures before finishing off with two stompers – Ma Force and Cochennec. There is a real old-meets-new-feel to the whole record as well, the songs are old, but freshly recorded and sounding powerful and they have enlisted help from the old brigade (Komintern Sect and L’Infanterie Sauvage) and the new breed (Outreau and Gonna Get Yours) to help out on vocals. The new generation of French oi! bands (Rixe, Syndrome 81 etc.) have put France right at the top of the streetpunk scene in my opinion, but this release shows that the old boys still pack a punch and are a force to be reckoned with. Tom Chapman