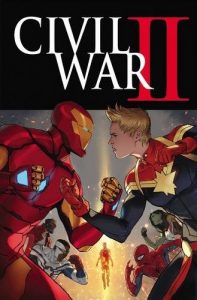 While most crossover events throw the four colour universe into turmoil for their duration, and following their cessation subvert the status quo with a brief period of chaos; in almost all cases everything, heroes, world structure, mythology and canon, reverts to its default, pre-cataclysm setting.  However, that wasn’t the case when the dust settled following Civil War. The aftershock and ripples were felt for more than a decade and it certainly isn’t true of Civil War II either, as there’s absolutely no way that anyone involved in this conflict will ever be able to break bread with their former foes, let alone fight alongside them. Everyone involved has lost too much and has seen their compatriots in a way that means they’ll never be able to trust and put their faith in them, let alone their lives in their hands, again. And everything that has happened, everything that’s been lost, destroyed and broken, it’s all because of one man.  Everything happens for a reason, and that reason is Ulysses Cain.

Or more accurately, it’s because of what Ulysses Cain can do. Having been exposed to the wandering Terrigen cloud, the reason for the misfortune that befalls the superhero community was granted the ability to see ‘the future’ and foretell great disaster. Having helped prevent an extinction level event from “behind the curtains” in Attilan, his existence is revealed to those who beat back the dimensional incursion that would have ended all life on Earth by the Inhumans. While Captain Marvel sees nothing but benefit in being able to know what’s going to happen, and that by being forewarned, can be forearmed and prevent doom, calamity and catastrophe by any and all means necessary, Iron Man sees the situation far differently. Being a futurist, he knows that what is to come is the result of infinite possibilities and that the future isn’t written until it actually happens and as such can never be accurately predicted.  And that is probably where things would have stayed, had Ulysses predictions not resulted in the deaths of two of the Marvel Universe’s central figures, one of whom was Tony Stark’s closest friend, confident and ally. With the loss of these heroes, the battle lines are drawn, and Captain Marvel and Iron Man, and those loyal to each, and who believe as they do, go to war. Rather than playing out as a global showdown, Civil War II is fought as a series of skirmishes that are interspersed throughout the wonderfully plot and dialogue heavy story, before culminating in a brutal, no-holds barred, vicious brawl between the main protagonists which only one of them walks away from which, ultimately, tears the superhero community apart.

Bendis has never been better than he is here. Civil War II is a blazingly intelligent story that mirrors the events  currently shaping the bastions of Western democracy and takes them to the nth degree in order to demonstrate how truly terrifying they are. It’s a story about the illusion of freedom and the lengths that certain elements of society are willing to go to in order to maintain their version of it, it’s a story about how easily power can corrupt even the most righteous of intentions and how absolute power can corrupt absolutely, how individuals are created by what they actually do and now what they might do and about the malleability of the future and how it’s shaped by each and every single one of us, interacting at a fundamental and very human level. Civil War II will, by design, separate it’s readership right down the middle, according to their own ideas of liberty, responsibility and the way in which free will determines the behaviour of the individual and society as a whole – and for the record, I’m with Iron Man. Backed by the staggering artwork of Marques, Coipel and Cheung, Bendis’ story is one of those life affirming, and changing, moments that reminds fandom, and even the casual reader, just how powerful comics can be, and that all often, the best stories are told in panels and splash pages.  Prepare for the future, because this is where everything changes and you want, no you need, to be there when it does.  Incredible, absolutely incredible… Tim Cundle