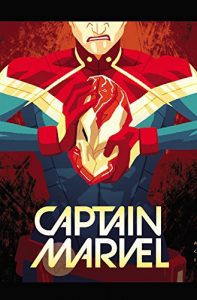 This was never going to be an easy read.  Not for me, nor I’m guessing some of the other folks who emerged from the other side of Civil War II bruised, battered and with their faith in one of the bastions of the Marvel Universe shaken. I was, after reading Bendis’ aforementioned story (into which this ties) a Carol Danvers fan, but given the Orwellian approach she took toward her job, her perception of its limits and how she rode roughshod over both, by the time I’d finished Civil War II I was somewhat disenchanted by, and with, Captain Marvel.  Mainly because I couldn’t believe the position that she had so rigidly adopted throughout it and her disdain for any form of dissension was at best troubling, and at worst, well that’s something that I don’t even want to contemplate. While I’m not sure that I’ll ever view Carol Danvers in the same way I did pre-Civil War II  again, after spending a couple of hours with Ruth Fletcher Gage and Christos Gage’s behind the scenes tale of Captain Marvel’s struggle to effectively police the ‘Ulysses Factor’ and use it for, what she honestly and truly believes to be, the betterment of all humanity, I get it. I get what she did and understand why she did it. I still don’t like it and still don’t believe she was right, but at least I get it now.  And that, at least, has gone some way to repairing my previously broken fan-boy relationship with the character. It isn’t completely fixed, and like I said, I’m not sure that it will ever be, but Captain Marvel: Civil War II has set that process in motion.

Detailing her battle with the bureaucracy, and the higher-ups, that she had to answer to throughout the conflict, Captain Marvel: Civil War II is the story of a soldier who never wanted to be in charge, but by default found herself having to assume that role. It’s the tale of Alpha Flight’s part in the superhero war, of the myriad checks and balances that she tried to implement, of the betrayal and treachery that she faced at the very highest level and of the infiltration and attempted corruption of the program that she so vehemently, and publicly, supported.  Captain Marvel: Civil War II explores the complex, conflicted character at the centre of Civil War II, and how she’s torn between her duty – and her view of the world as a soldier – and her personal life, and the way it shapes her reaction to the situation she finds herself in; and partnered with the pulptastic and at times almost retro, seventies flavoured artwork of Anka, Failla and Silas, ensures that Captain Marvel remains an eminently readable and hugely enjoyable book, even if Carol has lost more than a little of her previous sheen.  Like I said, after reading Civil War II I was ready to abandon my relationship with Captain Marvel, but thanks to Ruth Fletcher Gage and Christos Gage, it’s now nestling somewhere in “it’s complicated” territory. Let the healing begin…  Tim Cundle