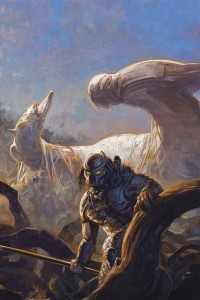 Tartarus, in mythology, is a place where wicked souls go to be punished for their crimes. It’s also where the Titans were imprisoned. Okay, history lesson over.

The crew of the USCM combat ship Hasdrubal have been dispatched to investigate, and if need be remove, prospectors from the planet Tartarus. With a Weyland-Yutani employee onboard as an observer, things go from questionable to bad, to worse very quickly as the marines find an Engineer ship and are attacked by Predators.

I should start out by saying that I love the Alien franchise. But I don’t love everything that’s a part of it. Something can start out great and end up falling flat. I also love, the Predator franchise, and when you’ve combine both, you’ve got a ready-made conflict. And that’s exactly what happens at the start of this mini-series. It pretty much hits the ground running thanks to its main antagonists. Abnett does a decent job of keeping the story running, though at times it does seem to be going too fast as there isn’t a lot of character development. The artwork by Thies fits the story quite nicely, as while it’s clean, it has a roughness to it that lends itself well to both plot and setting, but like the story, in some panels, it also seems a little rushed. I’m nitpicking though, because overall, Predator: Life and Death is off to a pretty good start and I’m sure, given the underlying meaning to the planet’s name, that there’s a lot more in store for the characters and audience alike Oh, and before I leave you, to rush out and buy the book, here’s a final bit of mythological history. Tartarus was also a living deity. Something to think about as you’re dragged deeper and deeper into the book… Jason Bonton