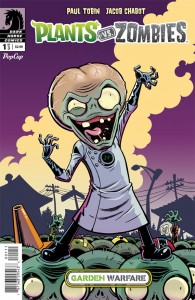 Plants vs Zombies : Garden Warfare – Paul Tobin/Jacob Chabot (Dark Horse)
I was very happy to see this land in my inbox this month. As a big fan of the Plants vs Zombies games, I’ve always thought that it has enough interesting characters and locations to convert to the comic world, or even the movie world. Now some of that potential has been realized, with Dark Horse Comics first installment of Plants v Zombies-Garden Warfare.
PVZ (as the cool kids call it), the game, was the brainchild of George Fan and was first published by PopCap Games in 2009. Fan’s intention was to design a “tower defence” style game which was both cute and gritty. He also wanted an element of the game to based on trading card games such as “Magic – The Gathering “ and thus PVZ was born. But it’s the 2014 installment, a third person shooter, PVZ-Garden Warfare that this comic more closely resembles.
The action is set in the town of Neighbourville, where all is well, until the evil Dr Zomboss and his zombie hordes plan to attack the plants and citizens of their idyllic town – from the future, with metallic butts (that’s right) The action bounces back and forth between timelines checking in on Zomboss and his cunning plan and our human heroes Nate and Patrice, who’ve noticed an influx in zombies lately. Written by Marvel writer Paul Tobin, PVZ-Garden Warfare, seems to be targeting the young teen crowd, but I found that it reads just as easily for kids, but contains just enough humor to keep the adults interested too. In keeping with the style of the game, some of the humor is told in the third person and many of the game’s best characters are included, so it’s instantly recognizable to fans of the game. This is part one of a short three part series, but if this is going to be the standard, then I would love to see more and even if you are not a fan of the games, it’s got time travelling zombies. Need I say more? … Chris Andrews