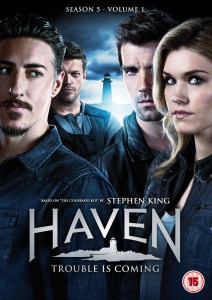 Haven Season 5 Volume 1 (Entertainment One)
If you’re reading this, I guess you must fall into one of three camps: those that have never watched but are considering catching up on boxsets; those who have followed with dedication from the beginning and are mourning the impending end of Haven; or those (like me) whose faith was lost/eroded during the fourth season when the writers seemed to forget all about both the over-riding story arc and “trouble of the week” in favour of lovey dovey moony-eyed insipidness. To the first group I have the following message: Yes, definitely dive into a box set of Haven, despite my criticism above, it’s well worth the time investment as, based on a classically Stephen King “horror within the mundane” premise (residents of small New England town are plagued by a series of seemingly random and destructive supernatural powers – here called troubles – which run in families and show themselves every 28 years) it has, as a series, that certain something that means you always want , no, need to know what happens next (hence people like me who may lapse a bit but have to come back). To the second group – the devotees – your faith will be rewarded with season 5, you’re in for a treat. And to the deserters – forgive season 4 its transgressions, there is some lovesick puppy-ness but it’s minimal, limited to Nathan and doesn’t get in the way of the story.
Okay, so where were we? Epic face off, Mara revealed, all kinds of apocalyptic chaos being set off all over town. Is that 2 or 3 lighthouses now? I lose count. All good stuff. But now the aftermath will have to be faced. So many questions. Where the hell did Dave originate for a start? Where has Audrey gone? Is she still alive? Can she be recovered? Do we want to? Will Nathan ever grow a backbone? All is yet to be revealed as we learn about “thinnies”, the mysterious woman from the CDC, the possibilities of the aether and, what to make of Duke’s new powers?
With this season, as with them all, the stand out number one reason Haven really pulls together is the supporting cast. Maybe it’s because of their Stephen King origins, maybe not, but these characters – especially Duke, Dave and Vince (Eric Balfour, John Dunsworth and Richard Donat respectively) – feel really nuanced and three dimensional. You care about who they are and what they do; much more so, in fact, than can be the case at times with the two “leads”. And the ever expanding role for ex wrestler Adam Copeland is proving a good investment as he handles himself admirably as the new leader of the Guild. But when push comes to shove, this is Eric Balfour’s show, and I’m sure deep down he knows it.
Interesting to note that when work started on series 5 they didn’t know it was to be their last, which probably accounts for the ever accelerating pace as we rattle through the episodes. I’m not complaining though, as it’s still got the people in my house guessing 5 seasons in which is no mean feat (especially from a family that worked out how Lost was going to end early in series 1). A really strong and thoroughly enjoyable romping adventure which will certainly keep you glued as we head towards the final half of the final season about to start airing this week. Fantastically good fun. Emma Mass Movement