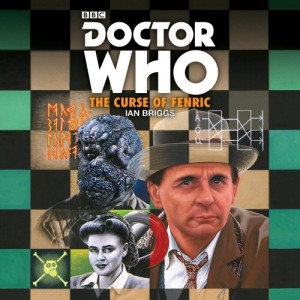 Doctor Who: The Curse of Fenric – 5xCD (BBC Books)
The Seventh Doctor (Sylvester McCoy) didn’t exactly have an easy ride during his television adventures. Hampered mainly by budget limitations, his was a tenure beset by numerous problems; but despite his slightly rocky start, his character later flourished, in both the literary and audio formats. And thanks to Virgin’s New Adventures and Big Finish, he became a firm fan favourite and is, more often than not, listed as by most die-hard Whovians as one of their Top Five Doctors. No, seriously, the top five, it really is a thing, because as with many other things in life, one is never enough. However, it wasn’t all doom and gloom during his initial period in the Tardis and his televisual tales did produce a few classic stories, and ‘The Curse of Fenric’, part of the Elder / Ancient Gods mythology that led the Seventh Doctor into much darker territory than he’d previously ventured, is one of them.

Set during the Second World War, it throws the Doctor and Ace into a maelstrom of secret commando missions, illicit military research, mysterious Viking history and prophecy that pits “allies” against each other and the minions of one of the Doctor’s most dangerous, long-standing foes. It’s a tale of secrets and the devious machinations of eternal beings, of the people used as pawns in their timeless struggle and the price that must be paid as all the world and those in it become their playthings. And having been enthralled by Terry Molloy’s energetic, immediate and engaging narration of Ian Briggs fantastic novelisation in which he brings each of the characters and all of the action to technicolour, three dimensional life, I realised that the version of the story I know, the one that was first broadcast three decades ago isn’t the definitive version of ‘Fenric’. The novelisation is. Or rather, Terry Molloy reading the novelisation is, as it expands on every single aspect of the drama. The enmity between the Doctor and Fenric, the supporting characters and their history and the evolving relationship between Ace and the ‘Professor’, they’re all explored in much greater detail. Everything that originally made ‘The Curse of Fenric’ great, everything that made it a Who classic, all of that innate magic, has been remade, remodelled, refined and in the process has been transformed into something wonderful. Absolutely superb… Tim Mass Movement