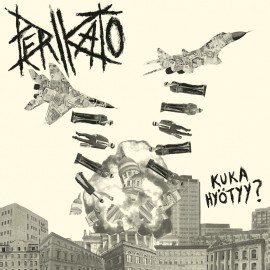 According to the label, this debut album from Perikato is being released for the first time this year. On listening to it, you have to doubt that, as it sounds like the head honchos of Svart Records have gone deep into the Finnish hardcore vaults and dug out a record that Propaganda records was supposed to release in 1983. This is primitive hardcore punk done the Finnish way – with nods to early Italian, Japanese or US hardcore along the way. Biscuit-tin drums, guitars buzzing through a transistor radio, gargled vocals spat through a broken microphone and a bass guitar plugged straight into the overloaded PA, one thing’s for certain – Perikato ain’t pretty but would you expect the bastard offspring of the likes of Discharge, Cheetah Chrome Motherfuckers, Kaaos, Bastards, Crucifix and MDC to be a handsome devil now would you? This is basically classic raw punk, with touches of hardcore and crust rearing their ugly heads here and there, always in danger of collapsing in on itself in an uncontrolled heap but always managing to pull back at the right moment. Beautiful, ugly noise. Tom Chapman