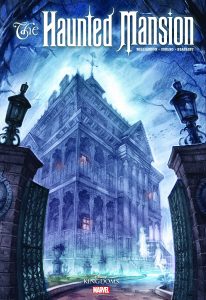 I make absolutely no secret of the fact that I’m a massive Disney fan. Yes I’m a middle aged, grumpy punk rocker, but I’m also a fervent and ardent follower of all things related to Walt’s world and yes, I could spend all day telling you exactly why but I don’t have the time to do so, and besides, this review isn’t about me, it’s about, The Haunted Mansion.  If you’ve travelled through its spooky corridors and explored its spectre ridden rooms, you can’t help but fall a little bit in love with this most iconic of Disney Attractions which possesses its own unique, and enduring charm, which Joshua Williamson has managed to capture in abundance in his frantic and endearing tale of the Mansion’s origins, denizens and the lost, lonely teenager who discovers all there is to know about The Haunted Mansion.

Williamson’s tale is all about Danny who, following the loss of his beloved grandfather, is persuaded to enter The Haunted Mansion and help its residents escape the curse that has befallen them. Having been convinced that his grandfather’s spirit now resides in the hallowed hallways of the Happy Haunts, Danny sets out on an adventure that will change his life, the way he sees the world and everything that he thought he knew about it, forever. As any devoted hound of the The Haunted Mansion’s horrors will gladly tell you, there are as many theories and stories about it as there are resident ghosts (which is at least nine hundred and ninety nine at last count) and rather than focusing on just one, Joshua Williamson incorporates as many of the varied legends and fables that have arisen about the house and the spirits that reside in it as possible, and each adds extra depth to his story.

All of its most famous occupants, the Grim Grinning Ghosts, Madam Leota and more are present and have a role to play as Danny desperately tries to break the curse while avoiding the Bride with a penchant for collecting heads and the Pirate responsible for all of the ghostly woes that have befallen The Haunted Mansion. While Williamson’s story is a tour de force tale of terror that will delight and enthral any and all fans of the world famous haunted house, it’s also explores how people come to terms with loss, and learn to move on from the seemingly inescapable, devastating aftermath generated by death.  Oh, and let’s not forget Jorge Coelho’s imagery and art, which perfectly encapsulates the spirit(s) of everything that The Haunted Mansion is in each and every panel and page of the book, or E.M, Gist’s covers which entice and invite you further inside and help to make sure that you once start reading and fall into The Haunted Mansion’s mystical and mysterious embrace, you’ll never want to leave. And if you ever do, you’ll always hurry back…  Tim Cundle