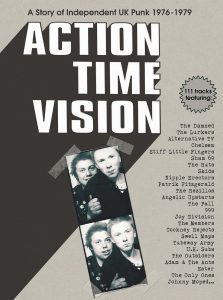 Punk rockers best start saving up your coin. Next year is 2017 and that number tells you that “40 Years Of Punk” is just around the corner. Already you have bands like The Damned, SLF and Angelic Upstarts working on 40 year anniversary tours and no doubt there will also be a million and one reissues, documentaries, gigs, festivals and other memorabilia competing with one another to convince you to part with your hard-earned cash.

Setting the bar pretty damn high from the outset comes this mammoth box set collection from Cherry Red. With the intention of documenting the early independent punk scene, this effectively means you get contributions from all the players of the scene with a handful of exceptions – Sex Pistols and The Clash being the obvious examples but for some reason The Buzzcocks aren’t represented on here which is a bit odd.

And with such a mission statement, the collection opens the only way it could, with an explosive “New Rose” from The Damned. This is followed with a bunch of big hitters from the likes of Eater, The Drones, The Lurkers, Rezillos, 999 and Sham 69. So far so good, but nothing we haven’t heard before. But then Cherry Red start taking us on a proper tour of what was going on. We move out of the realm of legendary clubs such as the Marquee, the Roxy or the Rainbow and into the broom cupboards, urinals and the shitholes up and down the UK (and beyond) that played host to a new generation of punk rockers. Names like Some Chicken, Puncture, The Panik or Jerks probably won’t be familiar names to many, but this compilation puts those bands alongside the household names. Add to the mix the likes of Johnny Moped, The Killjoys (featuring a pre-Dexys Midnight Runners Kevin Rowland) or Johnny & The Self-Abusers (pre- Simple Minds) and you have a pretty mighty line-up, and all of that is just disc one!

And so things continue across discs two, three and four, bringing together the famous, the cult, the less known and the downright obscure. There are lots of bands and artists on here that used punk rock as a springboard to future stardom so it is interesting to hear bands like Tubeway Army (featuring Gary Numan), Adam & The Ants, The Nipple Erectors (featuring Shane McGowan) and Riff Raff (featuring Billy Bragg) banging out some raw punk, with a certain sparkle that hints at the bigger things to come. As well as “New Rose”, there are some massive tunes on here that are always great to hear, such as Angelic Upstarts “Murder Of Liddle Towers”, Stiff Little Fingers with “Suspect Device”, Menace and “GLC”, Cockney Rejects with “Flares and Slippers” and UK Subs with “C.I.D.”.

Don’t get me wrong, I would have been happy if some of the more obscure songs on here were to remain rotting on an old C60 cassette in someone’s mouldy basement – not all punk rock that glitters is in fact gold. But on the whole this collection is a spot-on mix of all of the above, and the good by far outweighs the not so good, and makes for a great way to see in the special punk rock anniversary year. Tom Chapman