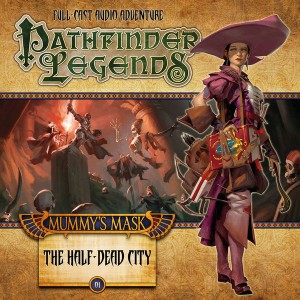 Pathfinder Legends: Mummy’s Mask: The Half-Dead City – Starring Trevor Littledale, Stewart Alexander, Kerry Skinner, Ian Brooker, Waseem Abbas, Donovan Christian-Carey, Nabil Elouahabi, Ashleigh Loeb, Zmira Wicking & Mana M & Written by Cavan Scott (From a Story by Jim Groves) – CD / Download (Big Finish)
After what seems like an eternity (well, not quite, but it has been too long), it’s time to finally return to Golarion in the company of that most tried and tested band of adventurers, Valeros, Ezren, Merisiel and Harsk. This time, they’ve abandoned the relative safety of Sandpoint and its surrounding locale and have travelled further afield in search of knowledge, treasure and whatever else their quest throws at them. Their thirst for wisdom, or rather Ezren’s desire to discover and learn all that he can, takes them to the Necropolis of Wati, a sealed city whose gates have been opened to all who dare enter the city for the first time in nearly two millennia. But the streets and buildings of the long dead city are filled with the denizens of death and only the most foolhardy and courageous of mortals would dare explore its hidden depths. Which means that its promise of wealth and power, regardless of the danger, are like a red-rag to a bull to our plucky bunch, but unbeknownst to them, it isn’t only monsters they’ll face in the ancient citadel; and the path they’ve chosen is about to lead them, and perhaps even Golarion itself, into even greater peril.

As exciting opening chapters go, they don’t get much better than ‘The Half-Dead City’. Beginning the second series of ‘Pathfinder Legends’ is grand style, ‘…City’ adopts the guise of that most beloved of fantasy RPG tropes, the dungeon crawl. It’s a hack and slash marathon that pits our heroes against undead abominations, spectres, ghosts, ghouls and monstrous horrors and tests their mettle against all manner of fiendish traps and curses. Built around an intriguing, intelligent plot full of double-dealing, betrayal and first rate characterisation, ‘City of the Half-Dead’ takes everything that made the first series brilliant and amplifies it ten-fold and strikes out in a bold, new direction. And that fact that isn’t afraid to do away with characters that the audience assumes will become major players, is a most welcome, Game Of Thrones style touch. Far more Moorcock and Howard than Tolkien, Cavan Scott and the incredible cast have captured the essence of everything that ‘Pathfinder’ is and have set in motion the beginnings of a true Sword and Sorcery epic. Welcome to Golarion… Tim Mass Movement