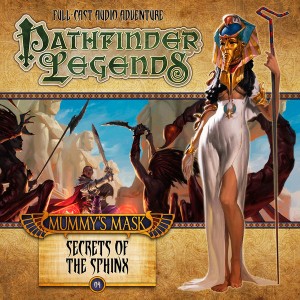 If someone had told ten year old me that not only would his adult self still be an avid gamer, he’d also be enamoured by a series of plays based upon, and set in, a world created solely for the purpose of an RPG system, he’d have leapt into the air, punched it a few times and then would probably have passed out after being overcome by excitement.  In all fairness though, if ten year old me had told grown up me the same thing, I’d have needed to have a sit down and a refreshing brew after hearing the news as well.  Not because of the gaming thing as the most that would have elicited would have been a shrug of the shoulders and a “Tell-me-something-I-don’t-know” roll of the eyes, but the idea that a game could be triumphantly transformed into an ongoing saga of audio stories, that would have been the bit that knocked me out. It’s been done before of course, with differing degrees of success.  The Dungeons & Dragons cartoons for instance, which were incredibly entertaining, if a little simplistic, and the films based on the franchise, which were just as simplistic, but far less entertaining than their animated precursor. Oh, and let’s not forget the Warhammer 40,000 movie, the Black Library audio adaptations and the audio books of R.J. Salvatore’s novels, the majority of which are engaging and a pleasure to spend time with. But none of the aforementioned have captured the essence or the spirit of gaming, the things that make it special and so beloved among its legions of fans, in the same way that Pathfinder Legends has. It’s got that same elusive spark, that thing that you can never place your finger on, that gaming possesses and it infects each and every story in the series, slowly building momentum and getting better and better with each successive chapter. And Secrets of the Sphinx is the best one yet.

As the adventurers set out to find Chissisik the architect’s sarcophagus (and hopefully the stolen larvae of their insect allies as well) hidden in the Sightless Sphinx, which lies deep in the desert, the story plays like a grandiose, forgotten Ray Harryhausen film before culminating in a brief, eventful and intense dungeon crawl.  Fighting monsters that strike from underground, from on land and the air, battling cultists and discovering ancient technology in the form of a gigantic, humanoid war engine before getting caught in the conflict that rages between the two opposing forces who call the Sphinx home, Harks, Valeros, Ezren and Merisiel, find themselves entangled in the most dangerous quest of their lives.  While I’m unfamiliar with the mythology of the Pathfinder universe (being more of an old school TSR, Chaosium, Green Ronin and West End Games guy), the sound design, energy and theatricality of the production means that you don’t have to know anything about the horrors facing the party, as they leap, fully formed and ready to maim, kill and worse into your mind’s eye.  The characterisation is fantastic, their interaction intriguing and the ever changing dynamic that exists between the adventurers will strike a chord with anyone who has ever entrusted their fate to the widely variable behaviour of a D20. This is how gaming is, or at least how we imagine it should be, full of energy, tumultuous action and adventure, all of which are tethered to each other by, and wrapped up in, a constantly evolving plot. Let the game begin… Tim Mass Movement