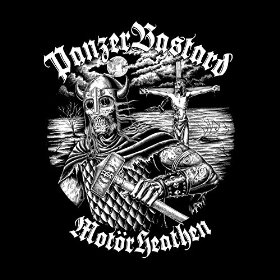 I’m pretty sure that KPanzer, the leader of this motley crew of hard charging, HC reprobates used to be in Wrecking Crew, which firmly establishes their long standing pedigree in the Boston HC scene. But the four weapons grade slabs of full throttle venom contained in the grooves of MotorHeathen don’t trade on their frontman’s past and rather than drawing their influence from his former band, Panzerbastard are their own monster and carve their own distinct, vicious path . And on MotorHeathen, they unleash their Motorhead forged, Cro Mags fuelled explosive artillery barrage in brutal, pissed off rapid fire succession.  It ain’t for the faint hearted, but if, like me, you dig high velocity, angry as all hell rock’n’roll, then you’re gonna love Panzerbastard… Tim Cundle