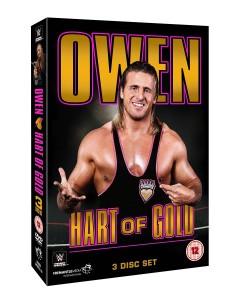 This is the best DVD collection I have had the pleasure of reviewing since I first started writing for Mass Movement in 2013.  The idea of an Owen Hart DVD has been on the cards ever since Owen’s older brother, Bret, made his peace with WWE back in 2009, but it has taken us six years to get there, largely because of legal complications.  Hart’s career and life were cut tragically short when he fell from the rafters of the Kemper Arena in Kansas City in a stunt gone wrong at WWE’s Over The Edge pay-per-view event in 1999.  Shockingly, this on-air death did not cause WWE to cancel the show, and the PPV continued right up to, and including, the main event title match between Steve Austin and The Undertaker.  Unsurprisingly, the Hart family sued WWE for the accident, and ultimately won eighteen million dollars in damages, but the wound never healed for Owen’s widow, Martha Hart, who continued to seek legal action against WWE in their use of Owen’s name and likeness until the matter was settled in 2013.  Even then, according to some reports, Martha provided further obstacles in the production of this DVD, tying WWE’s hands on some areas and refusing to allow them to use certain images and pieces of footage to which she has ownership.

On the one hand, I can sympathise with Martha Hart’s position — the company who were responsible for the death of her husband continuing to profit from his work seems obscene.  However, it is not so simple in the world of professional sports.  If WWE were forced to stop using Owen’s likeness and image then his stellar career — the thing he excelled at, dedicated his life to, and deserves to be celebrated for — would be forgotten.  The issue caused great splits in the whole Hart family as questions of legacy versus integrity played heavily on their minds, and my understanding is those splits have still yet to be resolved.

Thankfully, the decision to allow WWE to produce this DVD was made, despite the possible compromises to the full wealth and extent of materials available, because what we get on these three discs is a much needed reminder that Owen Hart was not just the younger, less successful brother of WWE legend Bret Hart, he was not simply the tragic footnote to that awful night in Kansas City, but instead Owen Hart was one of the most creative, innovative, dependable, talented and loved wrestlers who ever stepped foot inside the squared circle.  With the pressure of his famous family’s reputation and legacy on his shoulders, Owen ploughed his own path with a high-flying technical style that was way ahead of its time, and built a career that, in retrospect, is remarkable.

A product of my time, and the WWE storylines that formed my young opinions, my memory up until watching this DVD set was of Owen Hart as someone who never rose to the same excellence as his more famous brother, Bret.  But looking back at the classic moments of Owen’s WWE career I suddenly realised how integral Owen was, not only to many of my favourite childhood storylines in wrestling, but to my overall enjoyment of wrestling in general.  From the technically sound wrestling matches that were always a pleasure to watch to the obnoxious heel character he played during his heyday, Owen Hart shone at whatever he did, and whatever he did, he ensured it was as entertaining as possible.  Owen’s comedic chops come through here in abundance, from fond stories from his friends, family and co-workers about various ribs and jokes Owen pulled, to remembering his hilarious obsession with being a “two time Slammy Award winner”, to the promos he did so seriously while speaking utter fantasy.  Owen truly was a world wrestling entertainer, and it is lovely to be able to bask in a career that has so many highs, yet has been largely ignored from the history books until now.

The first disc is a well put together documentary which charts Owen’s childhood, early career, first WWE stint as the Blue Blazer, his short time in WCW, then his return to WWE, teams with Jim Neidhart and Koko B Ware, and his memorable heel-turn and feud with Bret, before the eventual Hart Family reunion.  It covers the time right up until, and after, Owen’s untimely death, and deals with the accident tastefully.  The overall message of the documentary is that Owen had an amazing career and his legacy needs to be remembered, and once you have watched the main feature here — including talking head interviews from superstars old and current, as well as unique personal footage Owen took himself — you are eager to re-live the matches that make up the bulk of discs two and three.  From early days in Stampede Wrestling, wrestling for his father Stu, to matches that took place in the last year of Owen’s life, what is amazing about the battles featured here is that they all stand the test of time and no two of them are the same.  Owen truly was the man of one thousand holds, and we get treated to classics against The British Bulldog, Bret Hart, Shawn Michaels, Razor Ramon, as well as lost gems like his match against Mick Foley, against Edge, against The Rock, and the brutal “Dungeon Match” against Ken Shamrock that involves one move putting someone’s head through the ceiling!

This is a five star collection from beginning to end.  Let’s hope that it marks the start of bringing Owen Hart back into public consciousness, and that WWE continues to publicly remember Owen, perhaps including a well-deserved Hall of Fame induction and inclusion on the popular WWE 2K video games.

Not only the wrestling world, but all of humanity lost a true great on May 23rd 1999.  This DVD is a wonderful tribute to the life of Owen Hart, and a worthy record of his career. Dan McKee