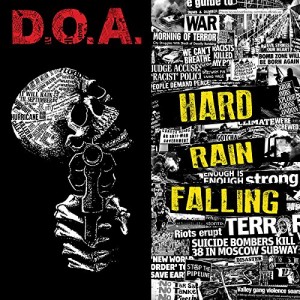 Seemingly back from the grave – I was sure that Joey Shithead had announced that D.O.A. were headed for retirement, yet here they are with a new album that rages as hard as they ever have. I’ve always thought of these pioneering hardcore punks as Canada’s answer to MDC or Dead Kennedys – abrasive yet catchy songs that blur the lines between punk and hardcore, with a supercharged sense of disdain for the system. D.O.A.’s message has not got watered down over the years and song titles such as “Warmonger”, “The Cops Shot A Kid” or “Racism Sucks” speak for themselves. Joey has mentioned that with this record they wanted to recapture the essence and spirit of the early days of “Hardcore 81”, and they have certainly achieved that highly ambitious target. This album collects a wide variety of styles, from straight up hardcore punk, through the blues-infused sounds of “Warmonger”, to their abrasive take on the reggae classic “Johnny Too Bad” and the outlaw country of “San Quentin” – but it is all put through the D.O.A. machine and delivers the goods as only they can. All together now, “We’re all D.O.A. …” Tom Chapman