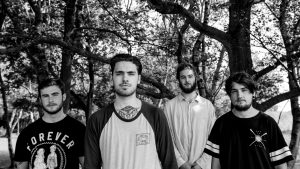 Bring Me The Horizon-That’s The Spirit: This album was a huge influence on Light The Skies’ sound. We really enjoyed the production and layering but mainly the fusion between Metal and Pop music, which is a sound we are currently trying to harness in our latest EP. With songs such as Drown and Throne, the popular singles from this album inspired our dramatic chorus’s and upbeat instrumentation in our new record. We have put this album at No.1 because it is an album we all massively admire, not only for the variation between each song, but the simple melodies mixed with complex and detailed parts within each song.

Don Broco-Priorities/Automatic: These two albums massively inspired the Rock mixed with Pop sound that we have developed in our recent releases. The albums made a huge impact lyrically and vocally due to the catchy hooks and simplicity of the lyrics. It also had an effect on our writing style as these two albums experiment with different tempos throughout. We wanted to write in a similar style, so we made it our own.  Songs like Automatic and Hold On inspired the guitar work that’s heard on Human. We liked the way clean guitar was used for the verses, which is something we hadn’t done before.

Hands Like Houses-Ground Dweller: Ground Dweller was a huge influence on the band, particularly the early work of Light The Skies. Hands Like Houses was one of the first influences on the band and a band we still The band were moved by the complexity of the instrumentation in each song, welded together with soaring vocals and hard hitting lyrics. This album encouraged us to write in sections, this was something that can be heard in our early work and allowed us to be really inventive and creative with our writing style. Songs like Lion Skin and Antarctica made us want to write with dramatic sounding choruses and lyrics, which lead to our previous release The Mother.

Dance Gavin Dance-Instant Gratification: We always put this album on whenever we travel! This album is very unique in terms of sound, especially songs such as Awkward and We Own the Night. This album massively inspired the drum and guitar work in our recent releases. Mixing clean guitars with screaming vocals is something we hadn’t really heard of before. Due to the sound of this album, it inspired us to write songs like Acclimate where we also try heavy vocals over a clean guitar and a groove. Lyrically, the album is quite vague and broad, which is something we liked about it. Overall, this album is one to stick on your playlist if you are after something different.

Pierce The Veil-Collide With The Sky: This album is filled with anthems! Inspired the high soaring vocals that Light The Skies have in songs like Distractions. Also influenced our early work with face-paced songs on the album like Bulls in the Bronx and King for A Day. Because this album was released in 2012, we grew up with this album and we based some of our very early ideas on some of the songs, inspiring the style of the band. It also influenced our current line up as Pierce The veil are a 4 piece Post Hardcore band. The drum work that is in songs like The First Punch was responsible for the technicality in songs like The Mother and Something Bigger than the Sea.

A Day To Remember-Homesick: The very successful album Homesick was one that we all grew up listening to. This entire album is filled with huge choruses and heavy breakdowns. When we formed in 2013, A Day To Remember was just one of those bands we constantly talked about and still to this day, really enjoy listening to. This is probably A Day To Remember’s biggest album and contains some of their most recognized work. The album had a big impact on the band because it was a huge success, which of course, was massively inspiring, especially in the early days of Light The Skies.

Neck Deep-Life’s Not Out To Get You: Neck Deep’s album Life’s Not Out To Get You has had a big impact on the latest work of Light The Skies. Songs such as Can’t Kick Up The Roots and Gold Steps was responsible for unveiling the uplifting side of Light The Skies and encouraging the band to write the song Looking Back. This album also influenced the lyrical style on our most recent EP. Songs like December inspired the lyrics that are in the song Acclimate and Ourselves. The album was also a huge success for the band Neck Deep and has potentially shaped the future musically for Light The Skies.

Sleeping With Sirens-Let’s Cheers To This: Sleeping With Sirens’ album Let’s Cheers To This for us is a band favorite and even helped shape the sound of Light The Skies in the very beginning. Even though the album came out in 2011, it is still an album we massively admire and is definitely responsible for inspiring the high vocal parts in our songs, especially in chorus’s like Half Mind and Chrononaut from our first EP Thing’s Aren’t On Fire, Fire Is On Things. In recent work, this album was an inspiration lyrically as each song had it’s own concept, which we wanted to do on our latest EP Human.

Issues- Self-Titled/Headspace: These two albums were huge influences on the band and probably the biggest influences vocally. The combination between heavy breakdowns and RnB/ Pop style vocals was exactly what we wanted Light The Skies to sound like from the beginning. Whereas Issues have more of a Nu-Metal sound, it is no doubt that’s songs like COMA and Blue Wall massively inspired the recent work of Light The Skies, especially the songs Animals and Acclimate. The albums Headspace and Issues sounded really unique to us and we like that the band don’t really stick to a specific genre, but rather bend into certain styles in different songs like The Realest and Late.

Blink 182- Self Titled: Lastly, we have chosen the album Blink 182 for this list. Some bands would be lying if they said that Blink 182 didn’t shape their sound in some way. The album has not only some of their biggest hits but (in our opinion) some of their best-written songs. The album was a massive inspiration lyrically due to the simplicity of them on this album especially songs like Looking Back on our EP. The album also taught us not to overcomplicate our songs musically and not to be technical in every song we release. No doubt a huge album that inspired and is still inspiring bands today.

Human the new EP by Light The Skies is out now. Get it here