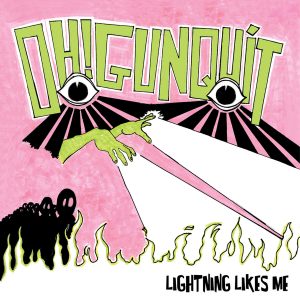 Get your hula hoop, bubblegum and dancing shoes at the ready, pop pickers. It’s time to do the mashed potato as London’s Oh! Gunquit have dropped their second long player Lightning Strikes Me. I was supposed to catch these cool cats live at The Windmill in Brixton last year but stuff and things happened. Now, on first play of this album, I’m cursing my superglued blue suede shoes.

You like your rock ‘n’ roll spiced with garage, punk and soul? Then thump your floor tom as this is the album for you! So Long Sucker opens proceedings and as soon as that tambourine shakes and those surf rock guitar riffs hit, you’ll be dancing like a speed freak doing The Madison in a B movie before you know it.

What follows is nine short, sharp instant singalongs skimming that sacred 3 minute mark. Proof of the catchiness can be found on Nomads of the Lost. Reminiscent of The Detroit Cobras, Tina Swasey’s chorus “na-na-na’s” trade soul shakedown blows with the saxophone and swirling organ.

Smiling Snake, another standout track, sounds like The Tornadoes stopped off to score some LSD off Vince Taylor’s Playboys before heading to the beach to go bustin’ surfboards.

To sum up this album, imagine the ultimate fun party band playing one of Z-Man’s house parties in Russ Meyer’s Beyond the Valley of the Dolls. If you times that by ten whilst shaking your wig, you’d be somewhere near. Now to catch these freak-a-billies live. Taxi to Planet Claire please, driver. Ginge Knievil