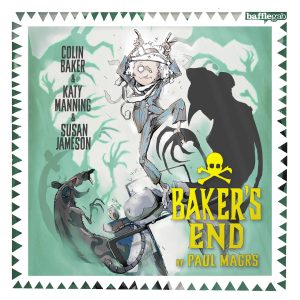 ‘The whole world falling to bits, lunatics are in charge and it’s all getting worse and worse.’

After a quick nod to the global state of things (and I write this after our beloved PM’s disastrous yet somehow symbolic conference speech in early October), we are reminded by housekeeper and ex-sacrificial offering Mrs. Frimley that things in Happenstance have been spectacularly horrible since The King of Cats disappeared into the inferno that engulfed his precious book tower at the end of the last adventure.  Daggnabbit, Tom is out of action and now there are rats the size of dogs running amok and a virulent plague (is there any other kind?) claiming lives here, there, and everywhere in Happenstance! White crosses have been painted on doorways to warn villagers of the plague’s deadly presence, and the local hospital waiting room has standing room only. Panic not though dear listener – all is being ably managed by Germanic ward sister Timperley, a woman with the lexicon of a navvy who appears to be part Marlene Dietrich part Frau Blucher…

…during the meanwhilst, in another part of the hospital, all hell has broken loose. For months now, the King of Cats has lain prone in a hospital bed, swaddled in bandages. But his burns have miraculously healed, he has started to wake up, and Mrs. Frimley and Suzy Goshawk are at his bedside, ready to welcome their self-proclaimed feline friend back into the fold. But remember…cats have nine lives…and the King of Cats is no different…and I also screeched when the bandages came off. Because it’s not Tom Baker under there…it’s COLIN!

It would appear that the King of Cats has…erm…regenerated. But is this new version able to save the village and his friends? What has happened to Reverend Ailing? Who or what IS Sister Timperley? And can renowned author and monster-hunter Derek Titts stop the rodent menace?

And – yes – here’s the elephant in the room. Can Colin Baker carry this off? Because I don’t know about you, but the reason I started listening to Bafflegab’s insane series was precisely because it provided a blank canvas for one of my personal heroes and favourite Doctors to paint as mad a picture as he wanted. And because the whole thing IS so ‘Bakeresque’, how can anyone else carry this particular torch?

Rather well, it would seem. You see, one of the things that makes the Baker’s End series so damn brilliant is the language – the way author Paul Magrs splatters words onto the page like some sort of linguistic Jackson Pollock, poaching a little from Edward Lear, pinching a bit from Monty Python, even borrowing a bit from Charles Dickens, and then adding these ingredients to the beautiful stew of language that is the story. And if ever there was a Baker (or a Doctor) who loved a bit of linguistic chicanery, it’s GOT to be Colin!

He’s marvellous. So marvellous, I realise as I write this that he has injected a breath of fresh air into something that I didn’t realise even needed it. His King of Cats plays brilliantly with Susan Jameson’s marvellous housekeeper-come-burnt-offering (God I love Mrs Frimley) and he has a fantastic, natural chemistry with Suzy Goshawk (which can’t be difficult. Let’s face it, Katy Manning is the living embodiment of the word ‘sparkle’).  Actually, Colin Baker properly sparkles in this too. I reckon he really enjoyed making this, because despite its madness, surrealism and nonsense, the whole cast are clearly having a ball.

Can Colin be the King of Cats for a bit longer please? Bex Ferriday