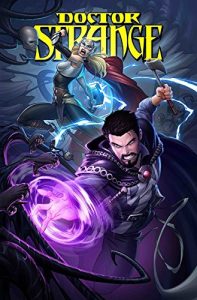 All good things eventually end, and it would seem that Doctor Strange is no exception to the rule despite his conjurations, sorcerous ability and knowledge of all things mysterious and dark. Or, more accurately, the book is closing on this particular chapter in his life. Which is a shame, as Jason Aaron and Chris Bachalo’s run on Doctor Strange has been exceptional, and has seen the character evolve in ways that were hitherto unimaginable. They transformed an aloof, practitioner of magic and sorcery who carried the weight of the world (quite literally) on his shoulders into a street smart, savvy combination of hero and hustler who was more akin to Dynamo than Merlin and in doing so ensured that his snappy, lightning quick adventures were a must have title that should have been topping pull lists everywhere.

Mr Misery in which, after paying an indispensable role in the battle against the Empirikul, the hidden side of the price Stephen paid and pays in order to maintain his abilities and position seeks to overthrow and gain a modicum of revenge on the man, and all those close to him, it blames for its subjugation and suffering, is, from the first frame to the last panel, riddled with an air of finality and closure. It’s a story of sacrifice, acceptance, change and maintaining a balance between the good and bad that life throws, mostly in unequal measure, at all of us. And it’s a tale about moving on as old relationships and roles fade away and new ones begin and prepares Stephen Strange for the next part of his journey.

But don’t despair and don’t worry, as Mr Misery is a climatic triumph, and while it finishes on a slightly sad and subdued note, it also promises a brighter tomorrow for the good Doctor and his nearest and dearest.  Written with zeal and authority, Mr Misery is, narratively and artistically, is fantastic and while it isn’t the ending I expected, it’s one that best serves both the characters and story, tying all of the loose threads together and drawing proceedings to a satisfying and appropriate end. But as one story finishes, another starts and given how good this book has been, I’m as excited as a sugar addict who’s just been given the keys to a candy factory, to find out what fate has in store for Stephen Strange in the immediate, near and far future. The Doctor will see you now… Tim Cundle