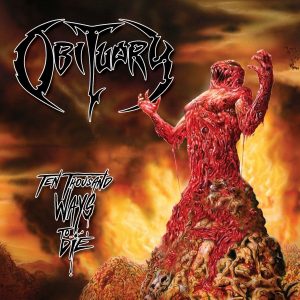 There might be ten thousand ways to die, and there probably are lot more, but the best way to go is being run over by all mighty, insanely heavy riffs and grunts from Obituary! Riffs as thick as the steaks they throw on their BBQ’s in the middle of a Florida summer. Be it in the studio, or live, Obiuray always provide an avalanche of swampy anger and bloodsoaked insanity. Instead of just releasing a live album, recorded at one specific, hot and damp, location this release has a bit more to it. First off are there two new tracks, Loathe and the title track on what one could call an old-fashioned EP or 12” In all honesty theses tunes don’t bring anything new to the death metal table but do fit the high protein diet that Obituary are reknowned for serving up. What makes it more worthwhile for me personally, being a faithful follower since Slowly We Rot, are the greatest hits played live at various locations in the US. From Baltimore to Phoenix to New York; killer tracks like Visions In My Head, Redneck Stomp, Don’t Care and Slowy We Rot jump off your prefered sound carrier and smash your skull in. There are ten thousand ways to die and thrashing away to Obituary is the best of all of them… Martijn Welzen