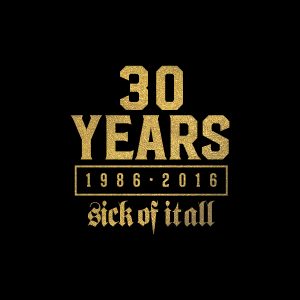 2016 marks the 30 year anniversary of the legendary New York Hardcore band SICK OF IT ALL. In order to celebrate this special occasion SICK OF IT ALL are set to release ‘When The Smoke Clears’ on November 4th, 2016 via Century Media Records.

The band didn’t just record five brand new tracks in their unique and classic old school style that are added as 10” vinyl and all five songs on CD, they also dug deep in their photo archives and pulled up rare photos as well as iconic shots from their past and present. Everything was compiled for a strictly limited, luxurious 60 page coffee table Artbook that is wrapped in faux leather and that comes with personal liner notes from people such as Davey Havok (AFI), Dennis Lyxzén (Refused), Chuck Ragan (Hot Water Music), Arthur Smilios (Gorilla Biscuits) and Matt Kelly (Dropkick Murphys).

Ahead of the anniversary release next week, the band have launched a lyric video for the song ‘Black Venom’

SICK OF IT ALL are about to wrap up the 4th leg of their European 30th Anniversary tour, which included a sold out show in Essen, before heading out to Australia with Refused in January 2017.