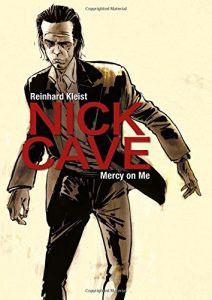 There are places that no man or woman should ever venture, or stray into, and sitting somewhere in the top ten of those places is the psyche of Nick Cave. Beloved the world over for his haunting and evocative music, lyrical tales of woe and misery and uncompromising exploration of the darker side of mortality, Cave is (rightfully) often referred to as a musical genius. A unique savant in a world beset by mediocrity and alone on his journey through it, Cave’s demons and imagination have forced him to forge a singular vision of, and take on, life and while those of us who follow in his wake, greedily digesting his output and hanging on his every word, are grateful for the raging maelstrom that fuels his creativity, the thought of living with, or even visiting, the inside of his head is a terrifying prospect.

But in Mercy on Me that’s exactly what Reinhard Kleist does in his part biography, part fantasy story that charts Cave’s life from his stuttering small town punk rock origins, through his wild days of excess, nihilism and abandon in the Birthday Party and struggles with addiction during the Bad Seeds formative years.  Kleist’s tale tears through a realm in which most would fear to tread before reaching its thoughtful, fantastic and fitting, subdued ending in the aftermath of the release of Push the Sky Away.

Told from, and incorporating multiple perspectives, namely Cave, the characters who form the basis of his songs and the people who were, and are, closest to him, Mercy on Me is a dizzying, detailed and carefully constructed deconstruction of the leader of the Bad Seeds. Possessing an almost hallucinogenic and at times ethereal quality and built around stark, highly detailed, black and white art and imaginative, intelligent prose that combines history, fantasy and Cave’s work, Mercy on Me is an astonishing piece of work that’s as insightful and disturbing as it is absorbing. And it is without a doubt the closest that anyone should ever get to actually vacationing in the incredible stygian mind of Nick Cave.  Thoroughly recommended… Tim Cundle