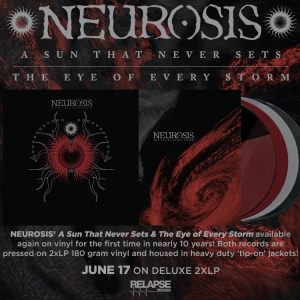 Relapse Records is proud to announce the next chapter in the ongoing series of vinyl reissues for heavy music visionaries NEUROSIS! In coincidence with the band’s 30th anniversary celebrations, NEUROSIS’s seventh and eighth albums A Sun That Never Sets (2001) and The Eye of Every Storm (2004) will each see a super-deluxe reissue pressed on 180 gram double vinyl and housed in heavy duty ‘tip-on’ jackets this coming summer. Both titles feature brand-new cover art and will include a digital download of the full record(s). The reissues are set for a June 17th release and are available for pre-order now via Relapse.com here.

A Sun That Never Sets has been out-of-print for over six years on vinyl. The album blends unprecedented beauty and radiance with NEUROSIS‘ classic use of dynamics and power. Highly regarded as one of the most important and influential albums of the 21st century, A Sun That Never Sets is the ultimate juxtaposition of life’s plain realities – a strong will in a world that inspires weakness.

The Eye of Every Storm has been out-of-print on vinyl since its original release in 2004 and saw NEUROSIS further expand their gargantuan sound to new heights with massive textures, gorgeous atmospherics and unprecedented songwriting. An absolute classic in the band’s incredible catalog. Stream the album via Spotify HERE.

Following select career-spanning anniversary performances in San Francisco and Tilburg, NL, NEUROSIS have been confirmed for a number of appearances at European festivals this summer, including at Brutal Assault Fest in the Czech Republic and Amplifest in Portugal. A full list of upcoming dates is included below.