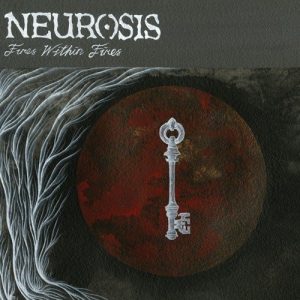 I’ve always had a soft spot for Neurosis. After the raging hardcore of Pain Of Mind they pushed boundaries of heavy music with albums like Souls At Zero or Enemy of The Sun. They developed a sonic nightmare vision that hundreds of bands would copy over the past couple of decades, whilst consequently following their own path. Fires Within Fires is their eleventh studio album, and it maintains the high standards and trademarks that you would expect from a Neurosis album albeit with some twists and turns here and there. Firstly the sound is somewhat stripped back. With Steve Albini at the helm the sound is close to the early Seattle sound of say Screaming Trees or Melvins – thundering and bass-heavy and perhaps with less of the subtleties that their early ground breaking albums featured. In particular album closer Reach is a drawn out song that is more rock than metal and would not sound out of place on an early Sub Pop record, albeit thrown through the Neurosis grinder. As with all their records, there is so much to listen to that you cannot easily summarise the nuances in one simple review after a few listens, as theirs is a craft that gradually develops and envelopes you, but my gut feeling is that Neurosis have once again proved to the world that they are indeed masters of their art. Tom Chapman