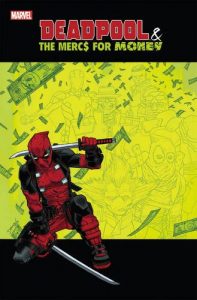 You just can’t keep a good (relatively speaking), psychotic mercenary down can you? That’s right kids old Wade is back and this time he’s got company, a whole mixed bag of fruit-loop crazy ne’er do wells, stone cold killers and second tier heroes who enjoy violence and getting paid to inflict and dispense it almost as much as their self-appointed “boss” does.  Deadpool went and got his own team of “super-heroes” together, and while the Mercs for Money aren’t exactly in the X-Men’s league, won’t be troubling the Avengers in the popularity stakes with ninety nine percent of the innocent citizens who populate the Marvel Universe and are destined to remain the shadows of just about every team of do-gooders out there, they have got the competition beat on at least one level. And that’s the body-count that they leave in their wake, which in Merc Madness puts Arnie’s world record attempt at killing absolutely everybody in his second best film, Commando, to shame.

Hired to purloin and attain a mystery container by an even more mysterious employer, Wade and his new chums find themselves at something of a loose end when their clients turn up dead.  After barely escaping their customers murderers with their lives,  and not being the sharpest tools in the box, the Mercs decide to go into business for themselves and auction off the contents of whatever it is they were hired to lay their hands on. The contents of which, incidentally, turn out to be the remains of a “clairvoyant” robot, whose garbled predictions could easily tip the balance of global power in favour of whichever villain manages to acquire it. As usual, things don’t go according to plan and before they can say “Uh oh, spaghetti-o’s” the Mercs become the target of every super-baddie in the world, all of whom have the same thoughts running their heads and are following a similar plan. Get the robot before the Mercs can deliver it and kill Deadpool and his friends just for the hell of it.

Cullen Bunn’s, devilishly quickly paced and cleverly plotted  sixties caper and heist movie style plot (which, if it ever hits the big screen would, of course, have George, Brad and Matt in the lead roles) is bursting with subtle, not so subtle and downright obvious nods and winks to bastions of geek culture and everything in between, but retains it’s incredibly inventive and original razor sharp edge, is stoked and fed by a rapid fire succession of puns and deliciously, delightful and at times, slightly close to the bone dialogue and copious amounts of brutality and bloodshed. All of which are captured in wonderfully gruesome detail by Bunn’s artistic partner in crime, the supremely talented Salvador Espin.  Right about now, I imagine your licking your lips and wiping down your fever ridden brow and are desperately attempting to shove Merc Madness in your virtual shopping cart while traversing the cyber corridors of an internet mega corporation like Amazon, but wait, before you do, there’s more good news. To further wet your whistle with a little more gore, those smashing folks at Panini have also included Posehn and Duggan’s Masacre (the Mexican Deadpool) origin story, which plays out like a badly dubbed, eighties video nasty attempting to do “mainstream” Spanish soap opera. Which, let’s be honest, is worth the purchase price alone. All things considered Merc Madness is a winner, winner Chimichanga dinner of a book. So, what are you waiting for? Get stuck in… Tim Cundle