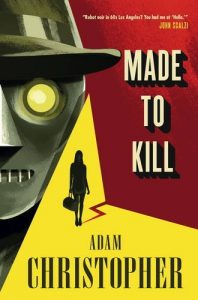 Ray is the last robot on Earth. A slightly skiffy, slightly noir-ish 1960s Earth. Half private detective and half morally blank killer, think a beefed-up Marvin The Paranoid Android wearing a trench coat in a relentlessly sunny Hollywood and you wouldn’t be far off the mark. Ray’s USP is that he forgets things every 24 hours – it’s all his tapes can handle – and only with the aid of his computerised handler, Ada, can he function as assassin or dick. It’s a neat set-up that promises much yet Adam Christopher’s Made To Kill is a curious oddity that feels less like a book and more like an exercise in style and light world-building that never quite gels. There’s a convenient get-out clause for how Ray is able to remember some things, for example. Also a lackadaisical acceptance that he is the last robot on Earth. Mixed with a frankly bonkers main plot involving … well, wait and see … I found Christopher falling back far too often on Ray’s steam-punky (for there’s a touch of that, too) foibles – seemingly every whistle, clank and groan that the robot utters has a comparison, almost as if this were originally written as a radio script and the sounds were simply left in. It’s an over-reliance on simile that is amusing enough at the start but quickly grows tired, so much so that in the robot’s own oft uttered words, I frowned inside. I wanted to like this book, I really did, but in the end it’s a superficial thing that could – and probably would – have worked well as a short story but outstays its welcome as a novel by dint of the fact it substitutes gimmick for exploration and really has nowhere to go and nothing exciting to say. There’s potential here but as it is I found myself, like Ray, with only a dim memory it ever existed. Ada? What was that book I read last night? Mike Wild