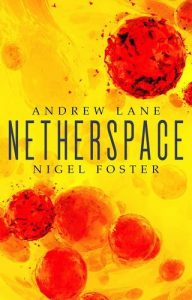 I am, I will freely admit, a hopeless devotee of first contact fiction and the post-realisation and interaction scenarios that make up the majority of the plots that are part of its tried, tested and true methodology. But I will however, also concede that far too many of the titles that take up shelf-space in the genre’s enclave, are – for want of a better word – hokum. They’re fifth generation copies of someone else’s far superior work that rehash the same old ideas without adding anything new to the mix. So, when a story like Netherspace appears, a tale that tears up the rulebook and flips the bird at the genre’s tired old stereotypes then you can bet your last dollar or Euro that I’m going to cling to, and revel in every word, description, character and plot twist that it throws my way. And for six hours and some change, that’s exactly what I did, consuming Netherspace in one furious, rabid, all guns and strange alien engines blazing sitting.

Set forty years after humanity discovered that it isn’t alone in the Universe, Netherspace adopts a unique approach to the way that humans and aliens interact with each other, in that they don’t. The only relationship that exists between the known three species of extra-terrestrials and homo-sapiens is one of trade. They give the Earth folk incredibly advanced technology and in return demand only the strangest of everyday objects. However, the price they expect for the drives that have taken mankind to the stars through the madness inducing, hidden realms of Netherspace is far higher. For the chance to conquer space, humanity has had to pay an excruciating and disturbing price, one that it begrudgingly accepts and that subverts, cheapens and demonises the way mankind sees itself and its galactic neighbours. And it’s in this world of massive technological leaps forward and moralistic and ethical stagnation that Andrew Lane and Nigel Foster’s story of a specialist team, recruited to negotiate for the release of hostages with a species that, prior to kidnapping the religious mission, had never shown any sign of hostility toward humans and with whom any prospect of communication, due to the incalculable differences that each culture is separated by, is next to impossible. But try they must, and as they slowly begin to realise the complete hopelessness of the task that lays ahead of them, the mysteries of the last four decades of post contact history, slowly begin to unravel.

Netherspace is the kind of dream big, imagine even larger or pack your bags and go home Science Fiction that I fell in love with as a kid. If Larry Niven and Issac Asimov had been punk rockers with one eye on the anthropological realities of a post contact society and the other on the kind of action and character driven drama that sells millions of copies in every airport lounge the world over and had then teamed up to write a Sci-Fi thriller, then I’m pretty darn sure that they’d have come up with Netherspace. Incorporating evolutionary biology and sociology into the kind of intelligent, bursting with ideas both big and small, well thought out and developed, Universe building, page turning, pot boiler that it’s impossible to put down, let alone walk away from for any length of time, Netherspace is remarkable. Absolutely remarkable. And you know what’s even better? If I’m right, and I hope to Gaia that I am, it’s just the opening salvo in what could easily become one of this decade’s best Sci-Fi series…  Tim Cundle