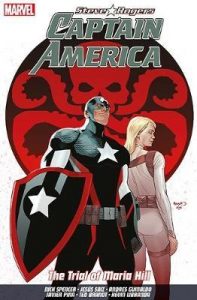 Every generation gets the Captain America it deserves. That said, what hero could be more fitting for an epoch governed by paranoia and the citizens who gave in to their base fears and the myriad swirl of populist politics and lowest common denominator herd instinct, than a Captain America whose only true loyalty is to that would be totalitarian terrorist organisation, Hydra? We live in strange times of our own making and we’ve been given the Captain America that we not only deserve, but the one that we, as a global society, have well and truly earned. And truth be told, Nick Spencer’s story of the best kept, and one of the longest standing, secrets in the history of the Marvel Universe takes Steve Rogers down a hitherto unimaginable and, oddly, captivating path. Even if this new Cap and the world that he finds himself in are a work of fiction writ large and propagated by the Red Skull and the Cosmic Cube, it’s still an intriguing and absorbing tale that’s continuing to unfurl its tentacles; and depending on your point of view is either wrapping them around, or smothering, fandom. Me? Having been a Captain America fan for long enough to know that he is a bastion of change for all things super-powered, I’m in the former camp because I know that sooner or later four colour reality having been bent as far as it possibly can will snap back to its former self, the status quo will return and Steve Rogers will once again be on the side of the angels. But until then, I’m just going to enjoy the ride, and believe me, The Trial of Maria Hill really is one heck of a ride.

Building on the slow burn intensity of the previous volume, The Trial of Maria Hill is a player driven story that focuses more on the interaction of its characters with each other and their rapidly changing and evolving paradigm than the gung-ho action that’s always been, up until now at least, a centrepiece of Captain America’s story. Spencer does a wonderful job of rewriting Steve Rogers’ history and his relationships with the people who have had a significant impact on – and as such are most important to – him, leaving no stone unturned and utilising every bit of minutia and detail he can to paint a convincing alternate portrait of his life. And Spencer does all of this while spinning a compelling thriller in which its protagonist slowly but surely moves and manipulates those around him, like so many pieces on a chessboard, to ensure that he rises to the position of ultimate power, while his soon to be nemesis Carol Danvers does the same and the Red Skull weaves his dark magic in a cold, forgotten corner of Eastern Europe. Everything is gradually taking shape and while The Trial of Maria Hill is fascinating, dialogue heavy  tale that stitches itself into your imagination thanks to the sublime art of Saiz and company, it also serves as an effective, and provocative, herald of the world breaking events yet to come. From small super soldier acorns, mighty multi-headed beasts of mythology grow. Hail Hydra. Hail Steve Rogers… Tim Cundle