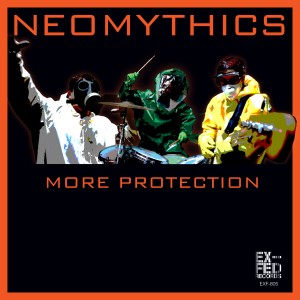 Neomythics – More Protection (Ex-Fed Records)
Post-modern rock? What the hell does that mean? Is that the same as post punk melodic hardcore modern rock?
This has legendary guitar innovator and recording artist Harvey Mandel, yes him, the legend, the man…….who? Anyway, to the music, it sounds like it does belong in the 1980’s, almost as if Peter Gabriel had recorded a concept album on the spur of the moment and instantly regrets releasing it to the general public. Or they could sound like a bad third rate XTC. There is one track that is sounds half decent and that is “Violet Revolutionary II” which is the best one of a bad bunch. I don’t think that they will use this review as part of their press release. Paul Hoddy