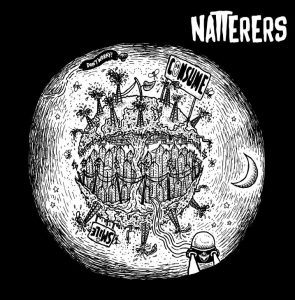 I saw this female fronted punk/ hardcore powerhouse a short while ago and was kicking myself for not picking up their records and lo and behold look at what drops through the letterbox – cheers Boss Tuneage & Mass Movement! As with the other bands featured in this flexi series, the raw format suits Natterers perfectly as their sound requires no polish, just spit and sawdust. This sits somewhere between some of the old UK bands with female vocals – think Dan or F.U.A.L., with driving American punk sounds of the likes of Adolescents or Dead Kennedys. Originally released on demo, this flexi showcases four songs of Natterers’ snotty, catchy punk rock sound. Tom Chapman