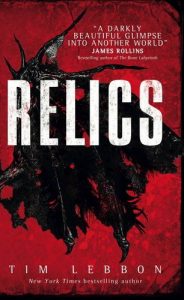 Relics comes festooned with an array of pull quotes along the lines of ‘magical, perilous drama’ and ‘darkly beautiful glimpse into another world’, but, while entertaining enough, it left me a little unmoved, I’m afraid. There’s nothing essentially wrong with it, you understand – think Clive Barker’s Nightbreed mixed with a Euston Films gangster generic and you’ll have some idea what’s on offer – it’s just that it contains nothing particularly wowser.

Set in a London where the relics of the title are of a fantastical nature – angels’ wings, witches’ tits, pixies’ cocks, and so on – which are much sought after by an underground market of collectors, Lebbon’s twist is that these flapping, sagging, dangling bits still flap, sag and dangle on creatures as living, breathing and real as you and I. Their battle for survival against hunters without qualms is for sure an interesting premise, but one that for various reasons never quite makes the leap from good to outstanding.

Part of the problem lies with the fact these creatures – who also count amongst their number satyrs,  cyclops, nymphs, and the like – don’t get out much.  Fair enough; if someone was waiting to slice off your knackers, you wouldn’t, would you? But in being enforced homebodies, both they and the book immediately fall into a cliche trap. Given that the Kin (as they call themselves) live in the shadows, using safe-houses, sewers and tube stations deep beneath the capital to avoid contact with our world, you find yourself thinking been there, done that, bought the t-shirt. Which is unfortunate, because there is a lot of promise here.

Relics simply cannot help but read like much you’ve read before, but if you stick with it, there’s some satisfaction to be had. Lebbon’s narrative drip-feeds the Kin’s presence – a bit of nymph titillation here, some pixie glamour there – and finally hits its pace when they bring in their heavy guns for the last few chapters. It can be an occasionally clumsily written affair – “it made a grinding noise as the wheel ground across the knobbled concrete” – and one that persistently and gratingly strives for street cred by having our heroine say ‘fuck’ all the time – but you could do worse. If, like me, you really like the very last scene, then it’s likely worth the price of admission.

I give it a six. The promise the sequel offers, a nine. Mike Wild