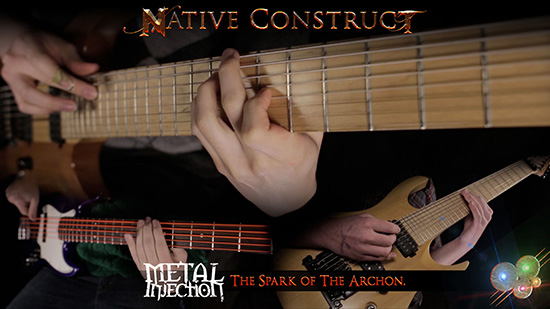 NATIVE CONSTRUCT will release their debut album “Quiet World” April 17th on Metal Blade Records. Today NATIVE CONSTRUCT has teamed up with Metal Injection for to debut the band’s play through video for their song “The Spark of the Archon”. This video, which features the intensely detailed guitar and bass portions of the song, can be seen HERE.

Listen to the first single, “Mute,” and pre-order the album now HERE

Guitarist and composer Myles Yang’s passion for innovation, coupled with his extensive academic study of arranging and compositional techniques, makes NATIVE CONSTRUCT a truly distinctive up-and-coming metal act. Yang, along with bassist Max Harchik, and vocalist Robert Edens completed work on their debut album “Quiet World” in between 2011 and 2013. By 2014, the band’s music caught the ear of Brian Slagel at Metal Blade Records, and led to a recording contract and a worldwide release of the band’s debut album.

“Quiet World” was largely self-produced and written between 2011 and 2013 in between the individual band members’ studies at the Berklee College of Music. What began as jam sessions simply for fun eventually turned into a full-fledged musical endeavor. All tracking and programming was done at the band’s home studios in Boston, MA, with the exception of vocals, which were recorded with Jamie King at The Basement Studios in Winston-Salem, NC. The album was mixed by Rich Mouser at The Mouse House Studio in Los Angeles, CA, and mastered by Jamie King (Between the Buried and Me, The Contortionist).

A brief listen to “Quiet World” is enough to make it apparent that there is a concept, here. Though it’s best to let the band explain the album in their own words: “Quiet World” is about a guy who loves a girl. The guy is a bit of an odd and eccentric person – an outcast. He’s also a mute, and a little unstable, as it turns out. The girl doesn’t return his feelings, but he can’t bring himself to let go. As his unrequited passion for her devolves into obsession and eventual resentment, his mind begins to slip further and further away. He convinces himself that he can’t be loved because of his condition and abnormalities. So he decides to create for himself a new, fantastic world of which he has complete control – a world where there are no oddballs or outcasts. A world where everyone is surrounded by people who are just like themselves: a much quieter world.”

What is impressive about NATIVE CONSTRUCT is not necessarily an involved concept on a debut record, it’s that they wrote, produced, and recorded the album while balancing schoolwork and on a college student budget. It’s the epitome of “self produced.” And what NATIVE CONSTRUCT wants fans to know is that “the composition process for this album was intensely meticulous from top to bottom. Each note, each lyric, each twist and each turn were arrived at with the utmost care. As such, we were able to weave rich, often subtle layers of meaning into the music and text. We’re very excited for you all to experience the result of our efforts!”