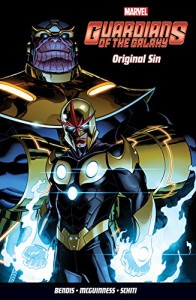 Guardians of the Galaxy: Original Sin – Brian Michael Bendis, Ed McGuinness, Valerio Schiti & Frank Cho (Marvel / Panini)
It seems a little strange, given the global popularity of Starlord and company, that less than a decade ago, mentioning ‘Guardians of the Galaxy’ in company of any sort would have drawn blank stares and confused expressions accompanied by a mutterings of ‘Who?’ from just about everyone in ear shot. Unless of course, you were, and are, die-hard comics fan. In which case, like I did, you’d have known exactly who they were, and are and would have smiled slyly, because whether we want to admit it or not, we all like to know something that the majority don’t, and it’s always cooler to be a fan of something before the masses start salivating over it and draw it to their collective bosom. Not that I like to gloat or anything, but you know, we were here first, we knew who Peter Quill was before everyone else did, so “Yay for us!” But, despite the whole mainstream popularity thing, the ‘Guardians of the Galaxy’ book has refused to change direction and hasn’t tried to capitalise on the runaway success of the film, and thanks to both former and current writers, Dan Abnett and Brian Michael Bendis (in that order), has been and is still one of the most consistently enjoyable comics that Marvel publish.

‘Original Sin’ opens with Quill and Drax explaining to Gamora what happened to Nova, themselves and Thanos when they entered the Cancerverse in an effort to finally end the Mad Titan’s machinations once and for all. It’s a brutal, at times shocking and highly emotive chapter in the lives of the Guardians that ends on an equally upsetting and uplifting note. Following that, we’re back in the saddle with the team as they’re reunited with their wayward member, Agent Venom, and travel to the planet of the symbiotes, in which Venom and his species surprising (and thoughtful)history is explored and a new future is granted to Flash Thomson and his inseparable other half. Meanwhile, political wheels and gears start grinding and an unexpected and shocking successor to Starlord’s father is elected without his knowledge or consent; it’s an appointment that’s bound to stir up trouble and cause a multitude of problems for our heroes. And that’s before they run into a secret SHIELD team locked in an eternal war with the remnants of the Skrull Empire, a conflict that the Guardians find themselves drawn into to.

If I was forced to try and pinpoint why ‘Guardians of the Galaxy’ remains one of my go-to books of choice, it’s have to be the razor sharp plotting, furious pacing, clever dialogue, wonderful characterisation and eye popping art that fill each and every frame of the book, and ‘Original Sin’ follows that recipe to the letter. Stories of super-heroic daring do and unimaginable feats of bravery and the bizarre don’t get much better than this, and that’s a fact Jack. It’s absolutely essential. And then some… Tim Mass Movement