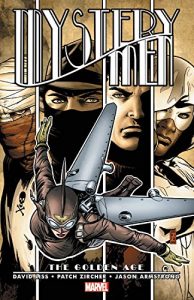 While it’s been a good seven or so years since this mini-series first saw the light of day, it wasn’t until the re-release of Mystery Men: The Golden Age landed on my doorstep that I was aware it even existed. Which, given my acute, and at times overwhelming, obsession with pulp heroes, Saturday morning cliff-hangers and chapter plays and the golden age of comics and radio drama, was something of, dare I say it, mystery. I mean, how could I have not known about this book? Driven by devotion to an age past and staggering adoration of nostalgia and built around a plot that lovingly recreates the best pulp adventure tropes but refuses to give sway to period sensibility by upping the story rating from PG to far more adult oriented fare, The Golden Age is everything that made me fall in love with comics in the first place and after reading it, it leapt straight into my top twenty books of the twenty first century.

Yes, it really is that good.  And this is why.  Combining the origin stories of a bunch of wildly different heroes united in their common goals of vengeance and ridding the world of a mutual enemy, The Golden Age rattles along like a machine gun locked on full auto, refuses to be bogged down in needless exposition and doesn’t let anything get in the way of its primary objective. That is, telling one heck of a good story that blends murder, mystery, conspiracies, superhero adventure and historical fact into a brutal, blood soaked, no holds barred, revenge thriller.

Sure, David Liss borrows a thing or two from the Shadow, The Spider, Doc Savage and King of the Rocketmen, and adds a little Lovecraftian horror, Robert E. Howard style fantasy and Shakespearian tragedy to proceedings but he does it so seamlessly and so well and has such a flair for the period that you can’t help but swoon all over, and fall hard for, The Golden Age. And boy oh boy, can he write. So it’s just as well that he’s teamed up with artistic heavyweights Patch Zircher and Jason Armstrong, with the former’s jaw dropping, detail heavy art adding extra punch to Mystery Men and the latter’s pulpier, noir inspired style putting some extra lead in the pencil of Daring Comics 70th Anniversary Special which is, incidentally, included in the pages of The Golden Age as an extra, pulptatstic treat.  Welcome to The Golden Age… Tim Cundle