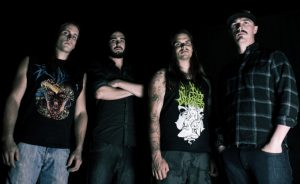 IRON MAIDEN – Seventh Son of a Seventh Son This album I can pretty much say is my favourite album of all time!! It was the album that sparked the initial flame in me to want to make music. I was 10 years old when my old man gave me a copy of this album on cassette tape. I would walk to school or the park listening to it on my old Sony Walkman and much to my parent’s joy they got to hear me try and emulate Bruce Dickinson’s high pitched laughs. This album took me on a journey from the Seven Deadly Sins Intro, fast paced solos, rumbling bass intros to the haunting dialog in the middle of the album’s title track. The whole story and musicianship built a fire of excitement and creative in my 10 year old who however went on to pick up an acoustic guitar and learn Smoke on the Water.

GREEN DAY Dookie My first year in high school and there was a school talent show where I saw my first live band. They played When I Come Around but at a faster pace, which made the front row of the audience and a 12 year old me, jump up and start moshing that back then mean you just jumped on top of each other like they do in rugby for some reason. I somehow ended up at the bottom of this pile and bounced my head off the hard wood floor, which gave me a black eye and the respect of the punks at school. These guys introduced me to the Dookie album which changed me from the center parted hair, goody two shoed smiley first year into a shaved head ear pierced spotty first year that now knew that hitting circles with wood looked like fun.

PENNYWISE Live at the Key Club At the time I got this album I was playing drums in a slow pop punk band and was getting bored to the lack pace. I was also skate boarding a lot and was in need of some music to pump me up while I skated. The answer came in this live album from Pennywise where they play all their song but faster. As a result I ended being kicked out of the band for playing too fast or not having a spiked frosted tip hairstyle.

REFUSED The Shape of Punk to Come I will be honest here and admit that I was late to the party program on this one but hey isn’t that how the story went with Refused anyway? Before I heard this album writing music for me was intro, verse, chorus, bridge, rinse and repeat all in a 4/4 time signature wash cycle. The Shape of Punk to Come was a new dazzling washing detergent that shook things up for me. All laundry metaphors aside this album really did open my eyes to the world of dynamics. For example the simple yet recognizable intro riff of New Noise that builds up to an anti-climactic electro down that brings you back up to the famous line. Refused will also go down in my books as one of the best live acts, thanks to them I got re-unite with dearest friends in the UK after 7 years away and join Denis Lyxen in shouting “CAN I SCREAM” after which the entire Brixton Academy shook and moved towards the stage.

EVERY TIME I DIE The Big Dirty FUN, PARTY, BOOZE, PARTY, SEX, FUN. So far I have told you about albums that mainly had an influence on me musically or inspired me to play music. This album however is the soundtrack to my “drinking years”.  I was hanging out with people nicknamed Saggy, Flange, Crapper, POB and our one purpose in life was to get bombed and go to shows, inappropriately chat up women and accidently get kicked out of bars for a bunch or party tricks I shouldn’t really put into text. Anyway I would play this album every Friday and Saturday to get jacked up to go party. It helped me become invincible.

BOTCH We Are the Romans I had just left a pop punk band and was looking for a new project to drum in and found it at a local show with some guys that were much older than me and more established musician. After talking for a few hours I knew I had my work cut out for me due to them talking about being a math core band and listing bands that I never heard of. Botch was one of those bands and thanks to Dan Best who gave me We Are the Romans I studied this album. It intrigued me because of its odd time signatures, rough mix and lack A,B,A,B structure. Thanks to this album I managed to elevate my playing ability so that I secured my spot playing drums in Deacon Birch.

CONVERGE You Fail Me This one was a toss-up between itself and Jane Doe. You Fail Me wins due to the amount of time I spent listening to it. The reasons to why I like this album are mainly because of the drums which to this day I still don’t know how Ben plays them and the overall tone and sound of the album. They have coined that rough, raw sound that makes them so intense and innovative. They have managed to open my ears to other raw sounding bands like The Power and the Glory, Circle takes the Square and Doom Riders.

MASTODON Blood Mountain Any one that knows me will tell you that I have a big man crush on Brann Dailor’s style of drumming. My infatuation with it started thanks to Blood Mountain’s opening track The Wolf is Loose. The thunderous thrashy punk drum intro grabbed me by the balls right away. I also fell in love with guitars on this album, that Led Zeppelin esc guitar solos in This Mortal Soil send shivers down my spine. This album is the reason I play the way I do today, why I am such a huge Mastodon fan and why I came back to playing drums after moving to Canada.

BARONESS Purple This album has been on repeat since its release. Baroness encompasses everything I respect in a band. They love to write music and nothing will stop them. It is their drive, emotion and humbleness that inspire me to keep on playing and writing music. All of that and more are poured into the Purple record which if you haven’t heard it then check it out because it is a beautiful masterpiece.

REVOCATION Revocation If it weren’t for this album the boys in Illyrian probably wouldn’t have kept me around. When I first joined Illyrian I wasn’t sure on what sound they were going for as I didn’t really listen to the majority of what they listened to but I wanted to get on the same wave length as them so I got the Revocation self-titled album which helped me zero in on the sound but not lose my own influences that I could bring to the table.

Illyrian release their new album Round 2 Fight on October 7th