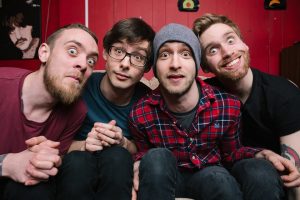 ‘Growing up I had a pivotal moment when I started getting into Reuben around 2007. My family had recently moved from the North of the country to the South, and a friend showed me the Deadly Lethal Ninja Assassin video to convince me to come along to see them live. I knew one line of one song but they absolutely blew me away. I got hooked on the band and found the studio diaries of them recording the album ‘In Nothing We Trust’. The sound of this record is a major influence on me as a musician, and discovering it is a large part of what set me on the path of playing in bands, making records, and basically just trying to find a way to make a living out of being far too loud.
With the massive uprooting coinciding with my age and my growing interest in recording I really jumped on these videos – they deepened the sense of musical connection to this band I had seen up on stage. It also introduced me to the producer, Sean Genockey, who had coincidentally produced many other records that I liked. The sense of fun that I saw throughout the making of this record made me think that being in a band and making records might be a great laugh, and I was briefly in a (terrible) band with the friend who first introduced me to Reuben. This pretty much convinced me to go to university to learn more about music, and this is where I first met Sam (Lead Guitar). We lived with Guy (Bass) towards the end of our course and met John (Drums) through the universities ‘seeking musicians’ board, and it pretty much all went downhill from there. Sam and I had already been jamming together throughout our course, and I sang and played really bad drums on the demos that eventually formed the first material we played as a full band.
The fact that we us came to Leeds (a city with such a strong DIY ethic) to study has had a profound effect on the way that Furr makes music. To date, everything we’ve released has been self-released, self-published, and self-produced at a studio that has basically become our own personal playground, putting our own time and money into everything that we do. We work with our friends in the Leeds arts community as often as we can, putting together shows with bands that we love, working with local artists for our artwork, and supporting some of the best independent venues in the UK.
Every time we start working on a song, prepare for a gig, plan a music video, or get into the studio I think back to the sense of fun and camaraderie that I felt when I first dived headfirst into ‘In Nothing We Trust’ as a teenager. If I’d never discovered that band and album then I wouldn’t be living in this city playing in a band with my three closest friends, hearing permanently damaged from too many amazing shows, constantly driving ourselves far too hard trying to make the best music that we possibly can. I wouldn’t change a thing.’