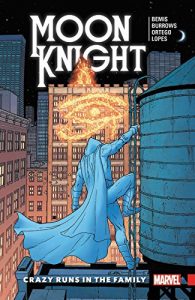 One of my most prized possessions is a copy of the very first issue of Moon Knight, so you’ve probably already guessed that I’m a bit of a Marc Spector, Steven Grant and Jake Lockley fanboy. The broken hero on, quite literally, a mission from god (well, a god anyway) always stood apart, and out, from the rest of the costumed crusaders club by virtue of the fact that he was far more human, closer in every respect to the people he was attempting to save, than his comrades in arms. A deeply flawed individual with more problems than solutions, the living avatar of Khonshu the Egyptian god of the Moon, made it okay to be different and still want, and be driven, to be more than the world would allow you to be.  For generations of kids who grew up knowing that they were outsiders and “weirdos” and that there was something about them that made them different to the rest of the herd, Moon Knight and the way he embraced his problems instead of fleeing from them and still ran headlong into danger to protect those who couldn’t protect themselves was not only a hero, he was an inspiration. He made me, and countless others, think that anything was possible when our peers and guardians told us otherwise and made us feel like we were worth something when society told us the opposite. Moon Knight and his ability to overcome any situation and adapt to it, for me at least, will always be the epitome of what it means to be a superhero and now he’s back to once more unleash his own wonderful brand of crazy.

I knew when I started reading Crazy Runs In The Family, that I was familiar with the name of the books author Max Bemis, but I couldn’t quite place him. Then it hit me, I didn’t know him from comics, I knew him because of his musical endeavours, which I hoped meant that he’d approach Marc and his various personalities from a different angle instead of following the tried, trusted and for the most part true route that most other writers have taken. And I was absolutely right, as like Jeff Lemire before him, Bemis lets the crazy do the talking and allows Spector and Khonshu to guide his hand. At its heart, Crazy Runs In The Family is a story of ancient, and very personal, rivalry that pits the Earth bound hosts of Ra and Khonshu against one another in the latest chapter of an aeons old argument and throws Moon Knight into the ring with his oldest adversary while adding a fascinating angle to the lore that surrounds Marc Spector and his various personalities. Incorporating theology, mythology, psychology and a dash of behavioural science into a tale that contains an abundance of bone breaking, vicious action and the kind of plot that keeps you glued to every word, panel and page, Crazy Runs In The Family isn’t just a consummate study in characterisation and story-telling that delivers the sort of finale that it’s hero deserves, thanks to the jaw dropping art of Jacen Burrows, it also looks incredible. Crazy Runs In The Family is everything that a good Moon Knight tale should be. It’s just weird enough to make you make you think and question everything you thought you knew about Marc Spector but not quite insane enough to make you think that maybe you didn’t know as much as you thought you did.  Let’s go crazy… Tim Cundle