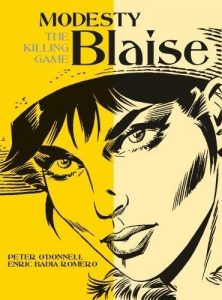 “No villains, no victims, no blood, sweat and tears … we’ll take a little break, Willie love, just you and me.”

Sniff. After no fewer than twenty-seven earlier volumes collecting the glorious lady’s adventures which originally ran from 1963 to 2002, Titan Books at last reaches Modesty Blaise’s final bow in volume 28, The Killing Game.  Actually, that story is her penultimate bow, the second adventure of three herein, and is accompanied by Modesty’s antepenultimate antics in The Last Aristocrat, which for obvious reasons I think a far more appropriate title for her curtain-call than that of the third entry, The Zombie.

Thirty-nine years of Modesty Blaise! That in itself is a remarkable achievement. But what is even more remarkable is that in all that time there has been no discernible lapse in quality, nor indeed in wit. I’ve waxed lyrical about Peter O’Donnell’s writerly skills in a previous Modesty review and so shan’t go into them here, but suffice to say none of the magic is missing.

Illustrated by Enric Badia Romero – one of the five Modesty artists, and the one who also drew Axa – the triptych of lovingly envisioned tales on offer is the usual – and I mean that in a complimentary way – world-hopping affair, whisking us from an English village fete to Corfu to the Indonesian rain forests and everywhere in between. It’s an itinerary that would put James Bond to shame. Lurking evilly in these places are Granny Smythe and her bacterial bombs, big-game hunters whose prey is Modesty and Willie themselves, and the new tenants of Apollyon, a country estate once the lair of satanists but now housing a far more technological threat.  I know, I know … you just have to read this, right?

Modesty’s final outings come with individual introductions by Kate McCall (producer of the Radio 4 audio adventures) and Daphne Alexander (Modesty herself, in same), as well as an utterly charming – and envy inducing – reminiscence from Paul Michael, Peter O’Donnell’s grandson, about what it was like growing up in Modesty’s ‘home’. Even Mister O’Donnell himself is here, with an essay released by his estate, All In The Mind, which attempts to answer that eternal question: where do a writer’s ideas come from? Reassuringly, he’s as clueless as the rest of us but ‘Poached egg defines cynicism’. Hell, you’ll see what I mean.

And so, as Modesty Blaise and Willie Garvin walk into the sunset, I leave you with Willie’s final words. They’re his response to Modesty’s comment above. Bittersweet, maybe, but everything has to come to an end. Think of it as my recommendation for this book. It’s the “Best bit of all, Princess.”   Mike Wild