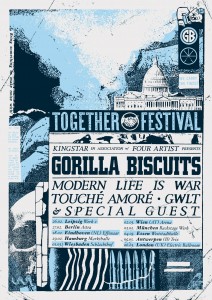 Modern Life Is War saw a triumphant return to European shores early this year as well as a performance of ‘Witness” in full at Reading & Leeds Festival proving they are still not only one of the most beloved bands in the punk rock/hardcore world, but one of the most important of the last decade.

The band released three highly influential albums before announcing a temporary hiatus in 2007. “Fever Hunting” is Modern Life is War‘s triumphant 2013 return to form with the original lineup of Chris Honeck, Matt Hoffman, Jeffrey Eaton, Tyler Oleson and John Eich in place. A true story of their collective coming of age, “Fever Hunting” plays and reads as an open diary of their last five years. Exposing every frayed nerve and internal struggle that it’s creators carried deep within their hearts. Impassioned, embattled, and forever resilient to the world outside.

From the first strikes of the anthemic opener “Old Fears, New Frontiers” it’s apparent that Modern Life Is War have not lost a step in absence, but have quickened pace on their own path. From there, the outpouring is overwhelming as eleven songs unfurl with equal and unmatched emotional weight. All of them bravely moving forward rather than resting on past laurels. Recorded by Kurt Ballou at God City Studios (Converge, etc) and Mastered by Brad Boatwright at Audiosiege Engineering (From Ashes Rise, etc).