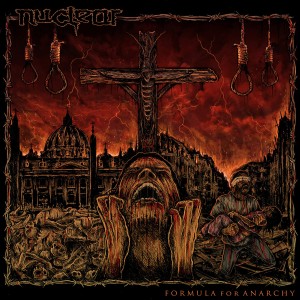 Formula for Anarchy, the ferocious new album from veteran Chilean Thrashers
NUCLEAR, is out now on Candlelight Records. Purchase and/or stream tracks at
https://candlelightrecordsuk.bandcamp.com/album/formula-for-anarchy

Check out the official video for “Self-Righteous Hypocrites” HERE.

Formula for Anarchy is NUCLEAR‘s latest studio album and the first under UK-based extreme label Candlelight Records. The band got the attention of the label during their 2014 tour in Europe next to the American bands Hirax and Bonded by Blood and finally inked a deal for three records. NUCLEAR‘s fifth album marks a new beginning for the Chilean thrashers. The band had this to say about the new assault: “it is by far the most uncompromising and violent material we have ever written – we are pretty sure both old and new school thrasher will dig it.”

Formula for Anarchy can also be purchased at iTunes and Amazon.

Formed in 2003, Chilean thrash metal band NUCLEAR burst forth from the underground scene with one of the most aggressive and powerful songwriting approaches the country had ever witnessed. Heavily influenced in 80’s thrash, hardcore-punk and old school death metal, NUCLEAR has never compromised or followed any trends during their career. Indeed, the band is deadly serious about their art. Since 2006, NUCLEAR has been releasing albums every two years. Five studio albums, one split vinyl, one live DVD, two live albums and hundreds of live shows around the world including tours in Europe and Latin America, and there is no end in sight!