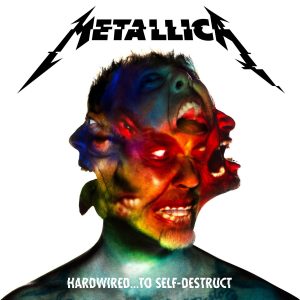 The release of a new Metallica record is always a cause for celebration. Everyone and their dog has an opinion about it, and the mainstream media desperately keep trying to come to terms with something they actually don’t know anything about or understand. First of all…. Metallica are NOT a thrash band. Not anymore at least, and they haven’t been since the tail end of the eighties. Sure there are thrashy songs on this record, most notably the semi-title track Hardwired and closing song Spit Out The Bone, but other than that, the tracks are riff-heavy groove laden songs, which are, in all honesty just too bloody long! Putting all your ideas into a single song makes them drag on for just that bit too much. Although I’m a fan of the band’s first four albums, I also know that I can’t expect, or want, them to turn back the clock. This album is, truth be told, a great sounding, kaleidoscope of Metallica memories from their own 35 year history, with plenty of songs for each and every one of their fans (including me) to enjoy. And the added visual aspect of creating a video for each song on the record? That’s an incredible feat of heavy metal artistry and listening to Hardwired…, I can hear Whiplash, Sad But True and Master of Puppets clashing with the Load / Reload era, and Death Magnetic . Which is all very impressive, but in places it just seems to lack the necessary, and expected, Metallica punch. That, my friends, has nothing to do with age, or maturity, because veterans like Slayer, Testament, Megadeth and (very soon) Kreator can still beat you to a bloody pulp with their opening salvo in the first round. Metallica though, they’ll eventually win via technical knock-out in the 11th round. And that’s cool for a rock album, but dammit this is supposed to be metal… Martijn Welzen