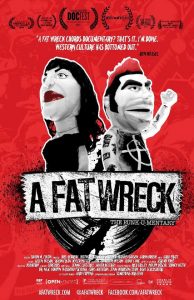 I’d wager that there isn’t a single person who -however they found it -became a part of the scene in the past two and some spare change decades who doesn’t own at least one album on Fat Wreck Chords. The label has become a punk rock institution, one beloved by hundreds of thousands of malcontents, miscreants and ne’er do wells the world over. Sure, there was a time before Fat existed and the scene was an incredible thing to be a part of back then, but it’s partly thanks to Fat Mike and his long-time partner in crime Erin that the scene expanded exponentially, reaching out to a multitude of disenfranchised kids and helping them to find whatever it was they didn’t know they were looking for. Along with Epitaph, Lookout, Revelation and Victory, Fat Wreck ensured that punk rock became a global musical force to be reckoned with and A Fat Wreck is the warts and all peak behind the curtain at the record label that changed punk rock that leaves no stone unturned as it charts the good times and the bad and the ups and downs of a truly independent, DIY enterprise that proved that you don’t have to compromise your ideals in order to succeed.

Told in a series of interviews with Mike, Erin, their staff and the bands that helped the label climb into the punk rock stratosphere (Lagwagon, Propagandhi, No Use For A Name, Strung Out, Good Riddance and many more) and interspersed with puppetry, animation and a ton of incredible archive live footage, A Fat Wreck doesn’t pull any punches in its uplifting, life affirming, funny, captivating, and at times heart-breaking, story. Full of strange, but wonderful little tales (like how Joe Escalante from The Vandals introduced Fat Mike to punk rock at Summer Camp and how the latter learned to run a record label by listening to, and watching, Jay Bentley and Brett Gurewitz when he worked at Epitaph) and never less than brutally honest, it’s a vivid snapshot of the history, and continually evolving face of a label and the people responsible for it, who live and breathe punk rock, twenty four hours a day, seven days a week, fifty two weeks a year. Shaped by its bands as much as the guiding hands of its owners, Fat Wreck more than any other label (except for maybe Epitaph) has come to epitomise what it means to be punk in the twenty first century by raising its middle finger to “the man” and continually sticking to its guns.  This is the story of Fat Wreck Chords and the bands and people who have spent more than two a half decades helping to shape and define what it means to belong to a scene in a rapidly changing and challenging world. And it is absolutely essential viewing for anyone who has, at any point during their lifetime, heard and followed the clarion call of Fat Wreck’s continuing musical output and legacy. So what are you punks waiting for? Go get it…  Tim Cundle