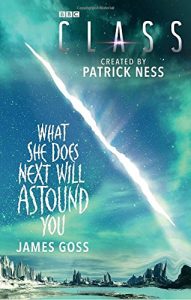 If you have visited the Internet in the past few years, you’ll have noticed that wherever your web-based travels take you, you’ll end up on one of those sites with row upon row of screamingly emotive click-bait headlines. ‘CHEESE! YOU’VE BEEN EATING IT WRONG ALL YOUR LIFE!’ ‘WHAT HE LOOKS LIKE NOW WILL MAKE YOUR JAW DROP!’ ‘THE PHOTOGRAPHER WASN’T EXPECTING THIS!’ So it’s with less of a nod and more of a Glasgow kiss that James Goss’s What She Does Next Will Astound You is written.

If you were around in the summer of 2014, you’ll no doubt remember the Ice Bucket Challenege which saw millions of people upload videos of themselves enduring the discomfort of having buckets of cold water chucked at them in order to raise money for charity. What She Does Next Will Astound You (which is far too long a title to keep retyping, so shall henceforth be referred to as ‘WSDNWAY’) sees the same challenge resurfacing two years later, this time asking that people take part to raise money for kids suffering with skandis. Internet users feel less than enthused. Repeating the same challenge is unimaginative, and what they really want to do is something that will ‘TOTALLY BREAK THE INTERNET!’ And so we are introduced to truthordare.com, a website that encourage people to on more and more extreme dares, while reminding them all the time that they are helping to raise money for those poor children with skandis. However, when someone pours boiling hot soup over himself, this proves to be only the first of an increasingly bizarre and dangerous list of stunts that take the Internet by storm.

But what exactly is skandis and why does nobody really know what this seemingly terrible disease does? And who is latest Internet phenomenon Seraphim? Is he the handsome, wholesome face of truthordare.com? Is he trouble? Is he in trouble? It’s up to our postmodern, Doctor-endorsed Scoobies to find out.

Class is the latest Doctor Who spinoff and it’s shown on BBC3, so it’s been written to appeal to the 16-34 demographic – those pesky Millennials who (apparently) want some low-key swearing, a bit of heavy petting and some light gore. As someone old enough to have grandchildren, I will admit that the first few pages of WSHDWAY had me worried. This is a book written for an audience some of whom may feel too old to watch a family show like Doctor Who but too young for the relentlessly terrifying adulthood of Torchwood. There are mentions of Nicki Minaj, Brexit and Donald Trump in the first two pages, which made me wonder whether it was trying too hard to be achingly ‘on point’, and each chapter is no more than four pages long. Do ‘the young people’ not have the concentration span required to read a chapter that takes longer to scan through than it does to tie your shoelaces? Kids of today…meh…etc.

WHAT I ACTUALLY THOUGHT OF THIS BOOK WILL ASTONISH YOU!

The thing is, despite my inner curmudgeon trying her best to come out (I’m old and resent young people with their fashion and their hair and their teeth), I found myself sucked into this book just as quickly as I was by its television counterpart. And by that, I mean within five minutes.

The programme I’ve been watching on iPlayer can be a little erratic, tonally (think Grange Hill meets Hollyoaks meets Buffy with the production values of a BBC1 afternoon soap opera), but is still massively entertaining. I’m even going to put it out there and suggest that it’s better than Torchwood, which, though also entertaining, was unrelentingly grim. However, this book knows exactly what it is from page one.

It’s confident, it’s lively, it’s painfully relevant to ‘our times’ and it gives some extra depth to the characters we have already met on television. And because of its short chapters, I actually rather liked the fact that I could dip into it for 10 minutes during a coffee break and read through four chapters (this makes my inner tick-box addict rejoice). WSDNWAY reminds me of those brilliant Buffy the Vampire Slayer tie-in novels in the ‘90s that I used to devour. Like them, it’s smart, sharp, and in turns both funny and tragic.

Add James Goss to your favourite author list, then add this book to your letter to Santa because whether you’re enjoying Class on BBC3, you’re a Doctor Who fan or completest…or even if you’re older than the recommended audience, you will thoroughly enjoy this.