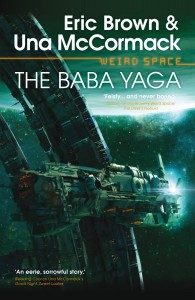 Growing up in the 1970s, consuming science fiction in novel and TV form, it took me a little while to realise that the people like me didn’t, on the whole, drive the adventures. Take Blake’s 7, for example, exactly the kind of thing I was devouring as a child. Cally and Jenna sat back on the Liberator, waiting by the teleport, while the boys – including the reluctant Vila – went off and made a mess of things on alien planets.

My frustration at the absence or sidelining of people like me has continued to this day and so I made a decision, a few years back, that my novels would have gender parity, i.e. that there would as many point of view female characters as there were point of view male characters. Nobody commented and nobody minded. In my next book, I decided to tip the balance in favour of the female characters. Nobody seemed to mind about that either. So I wrote a book in which all the point of view characters were female, and a few people said that that was nice and that they’d enjoyed it. So I decided not to worry so much in future.

My current book, Weird Space – The Baba Yaga, takes place in a shared world created by Eric Brown which contains strange Lovecraftian aliens emerging from another dimension into our universe, and a civilization of fearsome alien enemies called the Vetch, who are huge, hairy, and really quite repulsive to humans. I have had to learn how to write about these creatures in such a way that they seem both marvellous and plausible. In addition, in this book I have permitted myself the rare and alien experience of writing from the point of view of a chap.

This character, Kinsella, is on the whole a decent man. He is perhaps rather smug and pleased with himself, but he has some reason, being very capable at his job, and enjoying a great degree of wealth, power, and status in the world of the Expansion, the somewhat corrupt and dystopian human galactic civilisation invented by Eric as part of the backdrop of the Weird Space books. Kinsella has his good points too: a measure of loyalty, a sense of right and wrong, and courage when it comes to the crunch. The book does not suffer from his presence and, I believe, might actually be improved by it…

Mostly, however, this is a book driven by the women, and the kinds of experiences that women tend to have, or are more likely to have. I have tried, as I always do, to make the women as diverse as possible – in other words, to make them people first, but people whose lives are necessarily affected in some way by the fact that they are women. There are also Lovecraftian aliens – the Weird. And while I’ll be the first to admit that meeting brain-bending aliens is not, in general, the kind of experience that anyone has, whether male or female, the point is that in Weird Space, everyone gets a chance to meet them.

Una McCormack is a New York Times bestselling author and creative writing lecturer. Her latest novels are Star Trek: Deep Space Nine – The Missing and, with Eric Brown, The Baba Yaga, the third book in the Weird Space series.