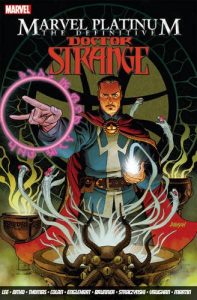 By the Wondrous Wand of Watoomb, this tome chronicling the life and exploits of the Sorcerer Supreme is long overdue, but thank the Vishanti it has finally arrived in this realm! The timing couldn’t have been better either as the good Doctor, with sometime Sherlock and occasional Smaug actor Benedict Cumberbatch (having assumed the mantle from the previous incumbent, Peter Hooten) in the lead role, is currently storming the Global Box Office in his latest big screen outing.  As you’d expect from the Marvel Platinum range, all manner of magical adventures are featured within its comprehensive and extensive pages. No sorcerous stone is left unturned in The Definitive Doctor Strange as it sets out, rather successfully in fact, to find out who the man beneath the Cape of Levitation really is.

From his embryonic beginnings as a practitioner of Black Magic to whom people turned for help in their darkest hours, through to his battles with Dormammu (including the Defenders featuring Hulk, Ghost Rider and Silver Surfer and Doctor Strange, freeing the Dark Dimension from its omnipotent would be ruler), Dracula, Shuma-Gorath and more, and his attempts to avoid becoming a pawn in the five thousand year war in the Heavens, all of Stephen Strange’s strangest escapades are captured, and  presented for posterity and the rabid hordes eager to consume them. And while they’re all, without fail, breathtaking and exciting missions involving mind-bending realms that – thanks to the rock solid combination of authors and artists who have handled the Doctor’s destiny since his inception – look and read like someone took an LSD thrill ride through Michael Moorcock’s Multiverse, it’s the more personal stories that leave a lasting, indelible impression.  His relationships with his eternal love Clea, his master The Ancient One and his friend and confidant Wong and the way in which he gradually changes from the arrogant self-obsessed surgeon to become the magical guardian of all mankind throughout the many versions of his character presented in this book, that’s where the real substance of his story lies.

His role as Sorcerer Supreme however, comes at a price; the sense of tangible loneliness and the longing to be able to form some sort of lasting connection with another being from outside his sphere of influence and power is ever present and while his image may have changed innumerably over the years, the man he is at his core, hasn’t.  The Definitive Doctor Strange a fascinating examination of the characters history, from his occult inspired genesis (doubtless rooted in the early sixties counter culture rise of the Satanic Church and Anton LaVey), through to his more seventies psychedelic phase from which he gradual morphs into the Doctor Strange we’re instantly familiar with as a symbol, and instrument, of power within the Marvel Universe, The Definitive Doctor Strange just about covers it all (and a little more besides) and goes a long way to explaining who he is, was and is set to become.  By the Hoary Hosts of Hoggoth, this isn’t a book you want, it’s a book you need…  Tim Cundle